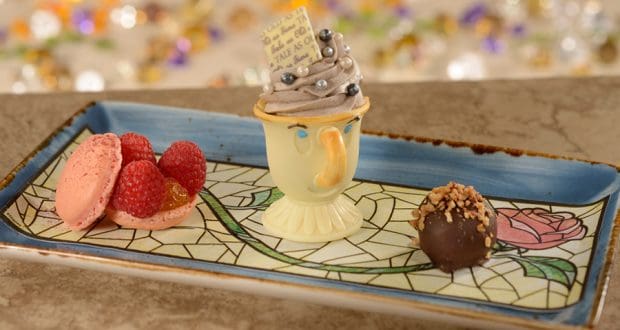 The Grey Stuff has always been a staple at Be Our Guest Restaurant in the Magic Kingdom, but with the addition of a new dinner pre-fixe menu this classic dessert just got an upgrade! This delicious cookies and cream mousse has previously been served on its own and atop cookies and cupcakes, but it’s now being served inside a white chocolate “Chip” cup. Even more adorable is the kids menu dessert, which features the same cup though unpainted with colored frostings and a paint brush for kids to decorate their own “Chip.”

One of the most underrated sweets at the Walt Disney World Resort can be found at Kringla Bakeri Og Kafe in Epcot’s Norway pavilion. The troll horn is a puffed pastry rolled in sugar and filled with sweet cream. While this bakery is most-known for school bread and rice cream, the troll horn flies under the radar but is the perfect sweet for a stroll around World Showcase Lagoon.

A new edition on the Disney dessert scene, edible cookie dough can now be found at the food court at Disney’s All Star Sports Resort. Cookie dough has been a growing dessert trend for a while now, so it’s exciting to be able to indulge in this treat on future Disney vacations. (It’s also nice to have a reason to make one of the value resorts a destination for those of us with a sweet tooth!) 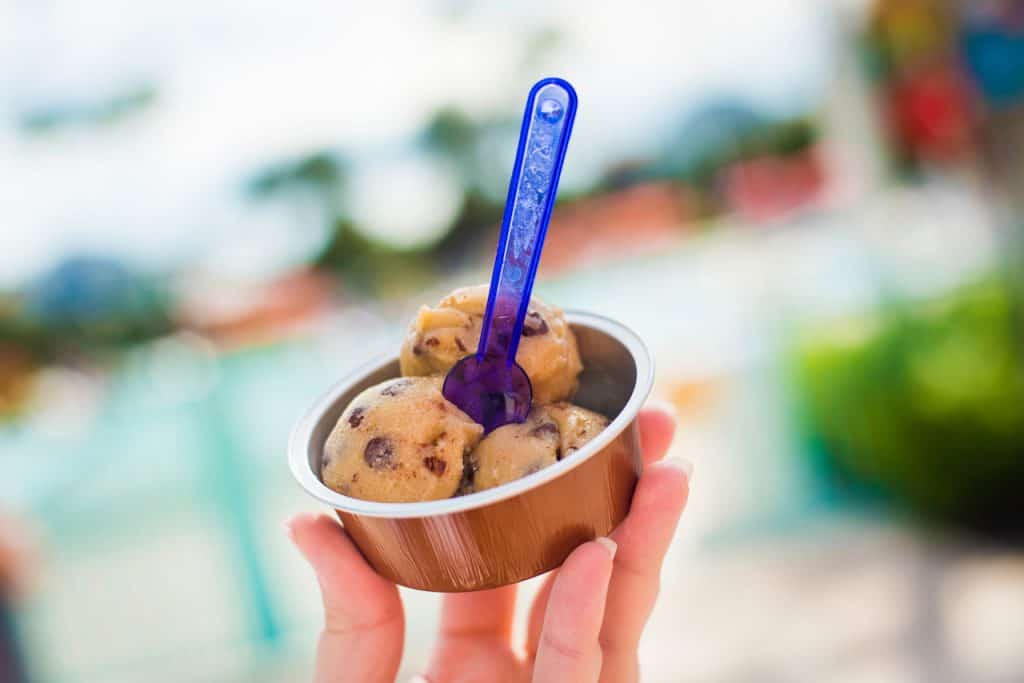 You can’t discuss Disney desserts without bringing up Dole whips. This refreshing dessert snack can be found in its original home in Adventureland in the Magic Kingdom along with a couple of spots in Epcot, Disney’s Animal Kingdom, Disney’s Polynesian Village Resort, and Disney’s Pop Century Resort. You can always get a Dole whip as a float over pineapple juice or swirled with vanilla soft serve, but select locations even serve Dole whip blended with rum. 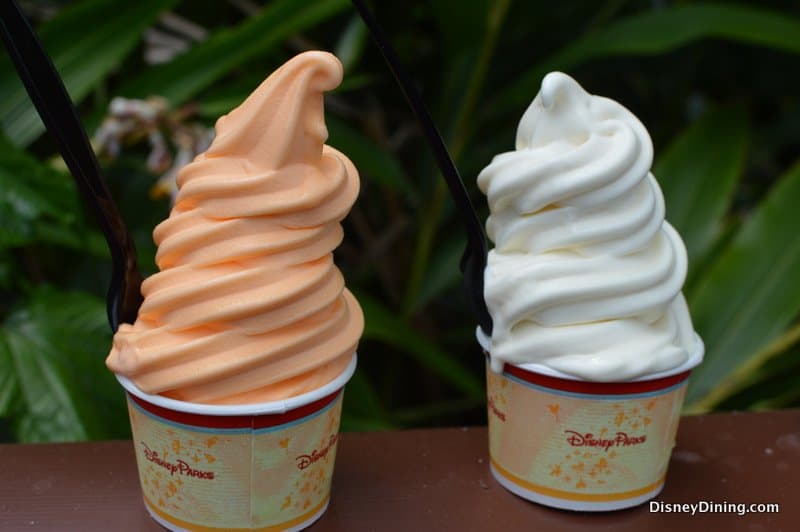 One of the most unique cakes at the Walt Disney World Resort is also the best way to end a meal at the Hollywood Brown Derby at Disney’s Hollywood Studios. The grapefruit cake exquisitely blends the tartness of grapefruit with the sweetness of a yellow cake, and it’s even adorned with a cut of dried grapefruit. It’s lighter than most cakes and unexpectedly sweet and refreshing, a must-try if you dine at this location. 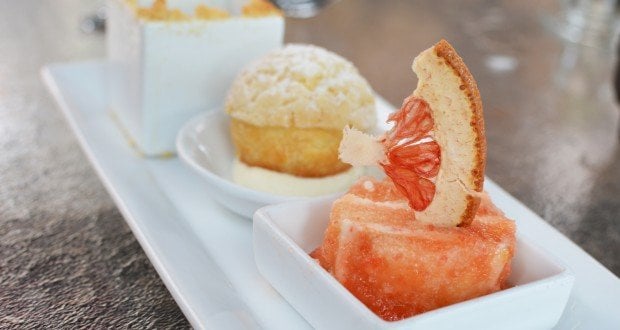 Zebra domes are one of those distinctly “Disney” snacks that for many guests are a must-eat for each trip. They’re available at Disney’s Animal Kingdom Lodge at both the dessert end of the buffet at Boma and the grab-and-go section of the Mara. What makes these little sweets so special? They’re crafted with caramel and white chocolate but the Amarula liquor is what truly adds to their unique flavor. 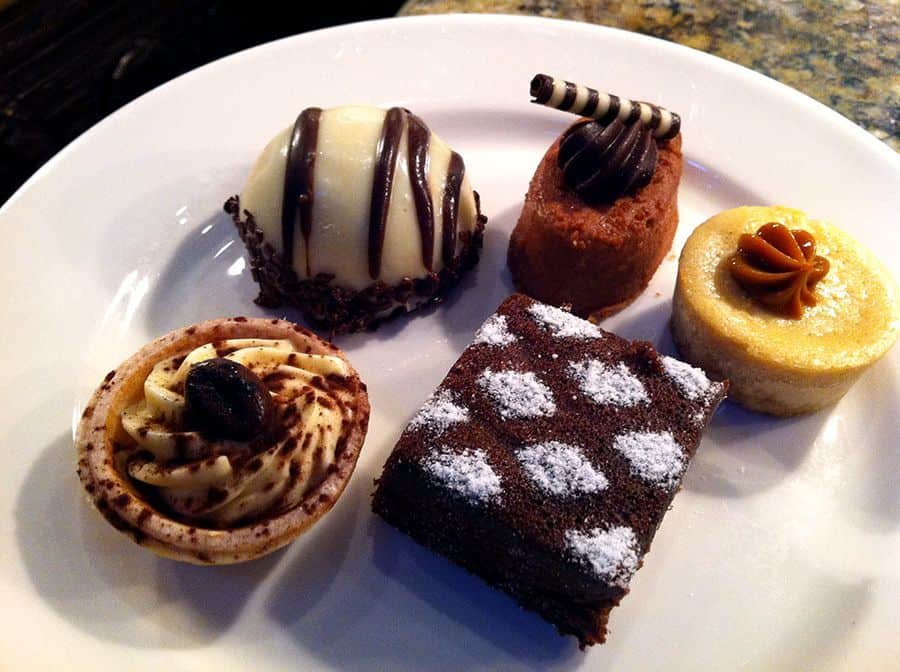 For a dessert that will literally tower over the rest of your meal, head to The Boathouse at Disney Springs. This restaurant’s signature Baked Alaska offers a different take on this classic dessert by adding in chocolate, graham crackers, and marshmallows. You may experience sticker shock when you check out this item on the menu ($40) but rest assured–the menu states that it serves four (though it can easily serve at least six!).

Bread pudding is fairly common among Disney dessert menus, but the absolute best place to get your share of bread pudding is ‘Ohana at Disney’s Polynesian Village Resort. Following a feast of potstickers, chicken wings, noodles, grilled meats, and more, saving room for dessert is no easy task. But if you are able to squeeze in some dessert here the bread pudding topped with bananas, caramel sauce, and vanilla ice cream is well worth it. Can’t get a reservation at ‘Ohana? You can order the bread pudding at the bar next door at Tambu Lounge! 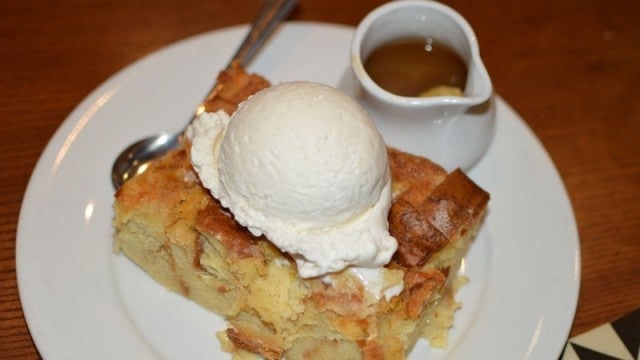 Afternoon tea at the Garden View Tea Room at Disney’s Grand Floridian Resort and Spa should be on every Disney fan’s bucket list for the experience alone, but the last course is what makes this truly special. Guests may select from a tray of assorted pastries for dessert or the strawberries and cream. The pastries are delicious however the strawberries are always super fresh, and the whipped cream topping is homemade and together the two create one of the best fruit-based desserts at the Walt Disney World Resort.

While dining in Epcot, apple strudel (topped with vanilla icing!) can cap off your meal at Biergarten. This flakey apple-filled pastry is one of the best desserts at the Walt Disney World Resort, and it offers a sweet end to a lunch or dinner filled with authentic German cuisine and entertainment. Thankfully, you can try the apple strudel without visiting the buffet if you’re not in the mood for that much food– Germany’s quick service restaurant offers the same strudel as the buffet. 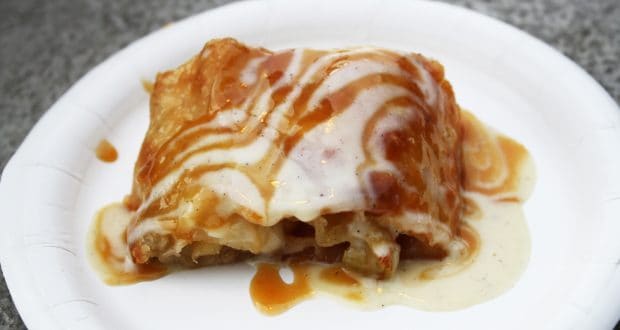