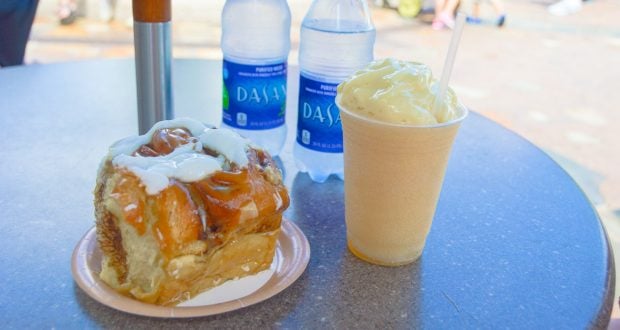 In case you haven’t heard it yet, we want to let you in on a little secret—calories don’t count at Disney World. Oh, and one more thing—Magic Kingdom desserts will have no effect on the bathroom scales. Ok, so maybe there’s little research that would necessarily support these claims. However, two things are true about desserts at Magic Kingdom: first, they just taste better when you enjoy them with Cinderella Castle in your sight, and second, since you will walk over five miles if you spend a full day at Magic Kingdom and enjoy most of the park, you do tend to burn some of those extra calories off. But in reality, who cares? Nothing seems to matter when you’re eating dessert at the most magical place on earth! Here are ten of the absolute best you’ve just got to try!

This magical dessert looks amazing and tastes even better. It starts with a rectangular-shaped “bowl” that looks like Mickey’s trademark red pants with the two buttons. (This “bowl” even has a faux faucet on it, so it really does look like a Mickey-pants-shaped sink!) It’s your choice of two scoops of ice cream, topped with another choice—hot fudge, peanut butter or caramel sauce. That is then topped with whipped cream and two cherries. You don’t have to share, but you might want to because this yummy dessert is huge! When you’re finished, rinse out your sink and take it home as a unique souvenir.

The dessert is so beautiful, you almost can’t imagine eating it—almost. It is made to look like the face of a clock. Roman numerals are written around the plate in chocolate. The base of the dessert is a flourless chocolate cake with white chocolate and berry compote. The clock hand is a delicious cookie that is, of course, pointing to the roman numeral twelve—the clock is striking twelve! You better eat fast!

If you love cinnamon rolls (and who doesn’t?), you’ve got to have one at Gaston’s Tavern! They only make cinnamon rolls one way at the tavern—HUGE! These cinnamon rolls look more like a big chunk of a cinnamon cake, and they are out of this world! They are served warm and are great to enjoy year-round—whether it’s warm or cool outside! Don’t visit Magic Kingdom without trying this amazing dessert!

As with many things at Disney World, Tiramisu at Tony’s Town Square Restaurant just tastes better! Maybe it’s because you’re eating it at the most magical place on earth. Maybe it’s the chefs in the kitchen. Who knows? Lady fingers soaked in espresso and served with whipped mascarpone cheese and dark chocolate shavings—just thinking about it makes me want to go reserve a table at Tony’s for our trip in June!

6. The Grey Stuff – Be Our Guest Restaurant, Fantasyland

If you’ve ever been to Be Our Guest Restaurant, you know that the Grey Stuff really exists! It isn’t merely part of the lyrics to a song from Disney’s Beauty and the Beast. Order it for dessert at Be Our Guest and you won’t be disappointed! Cookie crème and a chocolate shell are topped with Lumiere’s “Grey Stuff,” which is somewhat reminiscent of cookies and crème ice cream. Like Lumiere says, it’s delicious!

This dessert combines several sweet treats to make a dessert that has become quite popular among Guests at Magic Kingdom. It is served with one of Disney’s huge signature waffles. The waffle is spread with Nutella, and berries and bananas are piled on top! It’s a big dessert, and it’s worth the calories! This is one you’ll keep coming back for every time you visit Magic Kingdom!

Can’t decide between having a donut or having ice cream? How about having them both? At the Plaza Ice Cream Parlor, you can have your ice cream sundae atop a donut! The dessert is made with a glazed donut that’s covered with a cinnamon-apple topping. A scoop of your choice of ice cream is then put on the topping, followed by whipped cream, chocolate chips, peanut butter chips, hot fudge sauce, milk chocolate Mickey ears and a cherry. Wow! Now that’s a dessert!

This icy cold beverage isn’t listed as a dessert on the menu board at Gaston’s Tavern, but it should be! Enjoy it in a cup or a souvenir “stein.” It’s frozen apple juice with just a hint of toasted marshmallow that’s topped with a foam made of passion fruit and mango. It sounds a little crazy, but it’s crazy good!

There’s no such thing as a bad churro, and at Disney World, churros are even better! Mosey on over to Pecos Bill’s and enjoy churros with chocolate dipping sauce after your southwestern meal! It’s the perfect ending to lunch or dinner!

No Magic Kingdom dessert list would be complete without the legendary Dole Whip! It has such a fan following that t-shirts and other merchandise have been created to commemorate it! I prefer the original—pineapple soft serve in a cone! But you can have yours in a cup or in a float with pineapple juice! Try it in pineapple, vanilla or in a twist of both! You cannot go wrong with this icy cold favorite. One taste and you’ll know why thousands of fans don’t consider it a trip to Disney without a Dole Whip!