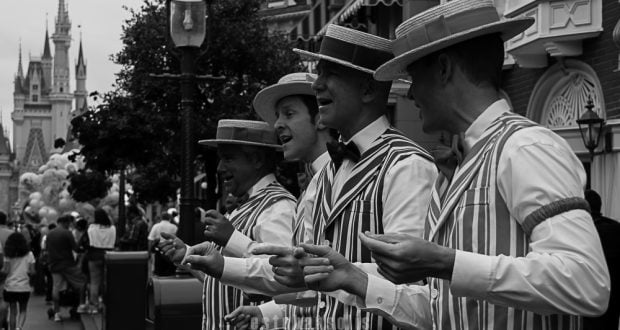 Walt Disney World is home to four theme parks which are filled with popular attractions and experiences that guests can’t miss on each vacation. The Magic Kingdom is home to plenty of popular and thrilling attractions which end up having long wait times on busy days in the park. Guests who spend time in the Magic Kingdom might find themselves heading straight for the big ticket attractions like Space Mountain, the Seven Dwarfs Mine Train, and Big Thunder Mountain Railroad, but in the process they might be overlooking some things. For each popular attraction in the Magic Kingdom, there are plenty more attractions and experiences which are underrated as they tend to be overlooked by guests. These underrated attractions are each unique and provide a wonderful experience that guests will be glad they stopped to enjoy. From singing bears and birds to patriotic presidents and a barbershop quarter, there are plenty of underrated attractions which might be overlooked by guests! Here are ten things that guests might be missing in Walt Disney World’s Magic Kingdom.

Adventureland in the Magic Kingdom transports guests to exotic jungles and locations from around the world and is home to popular attractions like the Jungle Cruise and Pirates of the Caribbean. Tucked away in a corner of the land is an attraction which brings a tropical serenade to life, but is often overlooked by guests. Walt Disney’s Enchanted Tiki Room presents a lively and entertaining show in which hundreds of birds, flowers, and tikis come to life above to serenade guests with catchy songs. Guests will love taking a seat in the theater in the round and directing their attention to the skies for a show they are sure to love!

Also found in Adventureland is an attraction which brings a classic story to life. The Swiss Family Treehouse invites guests to climb a series of stairs to reach the top of a massive tree where the Robinson family has crafted their home. After being shipwrecked on a tropical island, the family got creative and used items from their new location and the wrecked ship to build a home that is both innovative and inviting. Guests who brave the climb can enjoy beautiful views of the Magic Kingdom as well as the unique way that the Robinson family lives.

Frontierland in the Magic Kingdom is home to an attraction which has guests clapping along and stomping their feet by the finale. The Country Bear Jamboree features a cast of dozens of bears who take the stage and perform catchy country tunes for guests. With memorable characters like Henry, Trixie, and Big Al, guests will love singing along with the eclectic bunch who all take the stage for a show sopping finale.

While most guests who spend time in the Magic Kingdom’s Liberty Square head straight for the Haunted Mansion, there is another attraction which brings patriotism and American history to life. The Hall of Presidents resides in a stately brick building which features a lobby filled with historical artifacts and artwork. Once inside the theater, guests are treated to an experience that unites all of the Presidents of the United States on the stage for a breathtaking moment.

Tomorrowland is home to Space Mountain which is one of the most popular attractions in the Magic Kingdom. Guests who head straight for the thrilling attraction end up missing out on two others in the land which are totally enjoyable. Walt Disney’s Carousel of Progress originated at the 1964 New York World’s Fair and invites guests to travel through the century with a single family to discover how life has become more convenient and enjoyable through progress and new inventions. With a unique theater that rotates around a central stage and the catchy song “There’s A Great Big Beautiful Tomorrow,” guests are sure to love Walt Disney’s Carousel of Progress.

Also found in the heart of Tomorrowland is an attraction which offers guests a ride on the highway in the sky. The Tomorrowland Transit Authority PeopleMover whisks guests through the land high above offering wonderful views of the surrounding area, the hub, and Cinderella Castle. Throughout the journey, guests are offered glimpses into nearby attractions like Buzz Lightyear’s Space Ranger Spin and Space Mountain while they kick back and enjoy the breeze.

The Magic Kingdom is home to its very own railroad which is a relaxing journey that can also be a convenient mode of transportation. The Walt Disney World Railroad forms a loop around the Magic Kingdom and features three different stations in Frontierland, Storybook Circus, and Main Street. Guests who hop aboard one of the four vintage steam trains can enjoy a peaceful loop around the park and even use the Walt Disney World Railroad as a means to get from one location to another without having to walk far or through crowds.

The Magic Kingdom opens at different times each morning depending on the season and day. Be sure to look up the exact time of opening and get to the park at least a half hour before that. Guests who are there early are welcome to enter the park to spend time on Main Street U.S.A. before the park officially opens. Main Street and the hub in front of Cinderella Castle remain open while the rest of the park is still closed. Roughly 5 minutes before the official park opening, “Let The Magic Begin” begins! This is a welcome show held on the stage in front of the Castle with fun music, special characters, and a few fireworks to kick off the day!

Main Street is also home to another wonderful experience which many guests miss by heading straight to other lands for popular attractions. The Dapper Dans are a barbershop quarter who perform throughout Main Street each day. They can be found all over Main Street singing classic Disney songs, cracking jokes, and playing Deagan Organ Chimes for a show that is unforgettable!

Guests who are pirates at heart will love an entertaining stage show in Adventureland which offers the chance to be an authentic swashbuckler. Captain Jack Sparrow’s Pirate Tutorial runs several times each day in the Magic Kingdom and invites guests to partake in sword fighting and pirate training before taking a pirate oath to officially join the crew. This wonderful stage show is definitely worth enjoying while spending time in Adventureland!