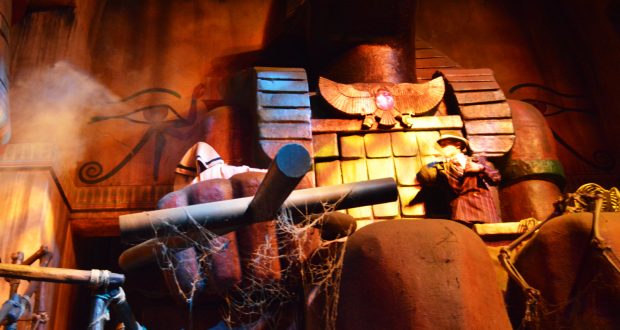 7 Facts And Secrets About The Great Movie Ride

When guests reach the boarding area of The Great Movie Ride and climb into the massive attraction vehicles, they can enjoy a mural painted all along the left hand side of the area which depicts the Hollywood Hills at night. The mural is beautifully done and features lush greenery, the iconic Hollywood sign, and other architectural details. Guests who look closely at the mural should focus in on an area filled with greenery between large palm trees. Found there is the silhouette of a Hidden Minnie which can be found easily by looking for her bow.

There are plenty of Hidden Mickeys on The Great Movie Ride which feature an array of popular and beloved Disney characters. One scene of the attraction brings guests into an ancient temple where an iconic moment from Indiana Jones and the Raiders of the Lost Ark is brought to life. On the right hand side of the scene, Indiana Jones can be found unearthing the Ark opposite a wall covered in intricately detailed hieroglyphics. On the left hand wall, guests should quickly look through the hieroglyphics to spot a Hidden Mickey depicted as a pharaoh being served by an Egyptian Donald!

Also found on the wall of hieroglyphics in the Indiana Jones and the Raiders of the Lost Ark scene is another set of hidden characters from the world of George Lucas. Guests who spot Mickey and Donald should continue searching nearby to spot hieroglyphic representations of iconic droids C3P0 and R2D2.

The Great Movie Ride features a relatively lengthy scene which brings guests aboard the spaceship Nostromo where they come face to face with Sigourney Weaver in her classic role from the film Alien. The scene shows Weaver fighting to survive and even features several encounters with the frightening space creature as well. Guests who are sitting on the left hand side of the attraction vehicle should look down towards the floor when passing through the Alien scene to spot a posted crew list. The crew names listed are those of the Imagineers who helped to design and create The Great Movie Ride.

Throughout The Great Movie Ride there are several references to classic Disney movies including Mary Poppins and Fantasia. While the Fantasia scene truly makes guests feel as though they are next to the Sorcerer’s Apprentice with whipping winds and splashing water, the scene almost never came to be. Originally, The Great Movie Ride was meant to include three scenes from the classic film The Wizard of Oz including one which recreated the chaos and winds of the tornado which sent Dorothy to Oz. Legal issues required that The Great Movie Ride only feature two scenes from The Wizard of Oz leading Imagineers to repurpose the set already created for the tornado. Thankfully, the scene leant itself well to Fantasia and the Disney animated classic was able to join the attraction.

One scene of The Great Movie Ride brings guests right into the middle of a gangster shootout where their friendly guide disappears and a questionable figure takes control of the vehicle. During the dramatic shootout, a car full of bad guys appears on the right hand side of the scene, and guests who look at the vehicle’s license plate will notice a historical nod. The license plate reads 021429 which references February 14, 1929, the date of the infamous St. Valentine’s Day Massacre.

A favorite scene of many guests who enjoy The Great Movie Ride brings a classic moment from Casablanca to life. Guests find themselves in the hazy airport where Rick says his goodbyes to Ilsa before she boards her plane. While the plane in the scene may look realistic, only half of it is there! The other half can be found as a prop over in the Magic Kingdom on the Jungle Cruise.