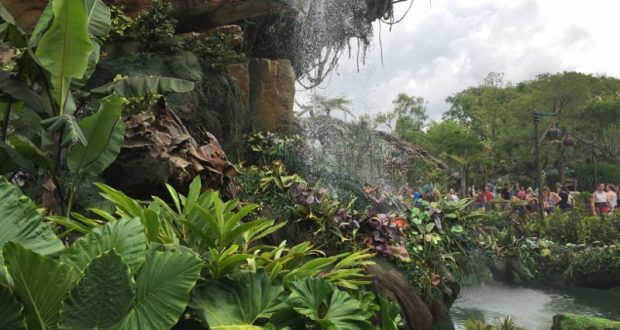 Of the four theme parks in Walt Disney World, the newest and largest is Disney’s Animal Kingdom which opened on Earth Day in April 1998. The park aims to showcase the beauty and diversity of nature while striving to teach guests about the importance of conservation and preservation in entertaining ways. Guests who spend time in Disney’s Animal Kingdom can come face to face with a Yeti, travel back to the time of the dinosaurs, sing along with favorite characters from Finding Nemo and The Lion King, embark on a gorgeous safari through the forests and savannahs of Africa, and can even take flight on a Banshee! With so many amazing things to experience in Disney’s Animal Kingdom, it is no wonder that guests love to spend plenty of time there and might think that they know all there is to know about the park. While guests might be knowledgeable, they might not know about some amazing facts and secrets waiting to be discovered. Here are the top eight facts and secrets to enjoy finding in Walt Disney World’s Animal Kingdom.

One of the most popular attractions in Disney’s Animal Kingdom is Kilimanjaro Safaris in the Africa section of the park. The attraction invites guests to embark on a two week safari through the Harambe Reserve where they can encounter beautiful animals like rhinos, elephants, giraffes, lions, cheetahs, and hippos. Kilimanjaro Safaris is so massive that the entire Magic Kingdom can fit inside of it, and it is home to one of the largest Hidden Mickeys in all of Walt Disney World. While enjoying the attraction, guests pass by a large island on the left hand side of the safari vehicle which is home to beautiful flamingos. Those who look closely will notice that the island forms a large Hidden Mickey!

One of the most beautiful entertainers in Disney’s Animal Kingdom might be overlooked by many guests since she blends right in with the park! DiVine is a performer who is decked out in beautifully created clothing and makeup which makes her look like a living and walking plant. Found high up on stilts, DiVine is larger than life and absolutely beautiful to see, so guests should always be on the lookout for her on the pathway between the Africa and Asia sections of the park.

Another tribute to Joe Rhode can also be found in the village of Harambe. The village features dozens of signs which are so authentic looking that guests might think that the locals have posted them over the years. One red sign advertises Cap’n Bob’s Super Safaris and features a cartoon representation of Joe Rhode as Cap’n Bob.

One of the most thrilling attractions in Walt Disney World can be found in the Dinoland section of Disney’s Animal Kingdom. Dinosaur invites guests into the Dino Institute where scientists have discovered how to send them back in time for a beautiful tour of the prehistoric world. Known as Dinosaur today, the attraction originally opened with the park in April 1998 under the name Countdown to Extinction. After the Disney animated film Dinosaur was released in 2000, the name of the attraction was changed to reflect the film. Guests who are brave enough to enjoy a ride on Dinosaur can spot a tribute to the original name of the attraction just after boarding their Time Rovers. On a wall near the seatbelt check is a series of numbers and letters which read “SECTOR CTX-WDI-AK98.” This references the name Countdown to Extinction, Walt Disney Imagineering, and Animal Kingdom 1998, paying tribute both to the original version of the attraction as well as the park’s history.

3. The Tree of Life’s Hidden Mickey —

The icon of Disney’s Animal Kingdom is the massive Tree of Life which features thousands of vibrant green leaves gently swaying in the breeze. While the tree itself is beautiful, it is the trunk which makes it completely unique as there are hundreds of intricately carved animals all along it. Guests who are standing on the pathway from Africa to Asia and are looking at the back of the Tree of Life should look for a hippo who has an upside down Hidden Mickey just above his eye.

Kids and kids at heart can dig in and look for prehistoric fossils and dinosaurs at The Boneyard in the Dinoland section of the park. Featuring a play area and plenty of unique items to dig for, all guests can enjoy getting their hands dirty and feeling like real life paleontologists. Guests who take a moment to pause and inspect the large bone which acts as the sign for The Boneyard will notice that is shaped like the original footprint of Disney’s Animal Kingdom. With a small marker indicating which direction is north on the sign, guests can check out the shape and geography of Disney’s Animal Kingdom including the now extinct Camp Minnie Mickey area.

If you’ve had a chance to visit Animal Kingdom’s newest land, Pandora – The World of Avatar, chances are you were impressed with its sheer beauty! You were likely rushing to one of the two attractions held in this land known as Avatar Flight of Passage and Na’vi River Journey. If you have a moment to stop and explore Pandora’s setting (the Valley of Mo’ara), you might want to look up at the unbelievable floating mountains. Get this – there are 22 floating mountains in total! Plus, look around at the lush landscape and be in awe of the 250 varieties of living plants that are integrated with Pandoran plants. Just amazing!