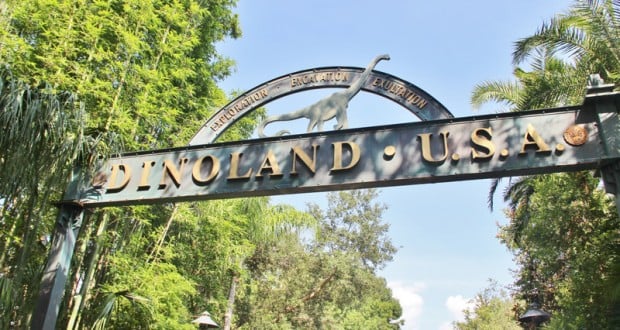 Guests who spend time in Disney’s Animal Kingdom can celebrate the beauty and preservation of nature while feeling as though they are traveling the world. From adventures into the Forbidden Mountain in Asia to going on safari in Africa, guests can experience many adventures throughout the globe. A favorite land of many guests not only allows them to travel to another place but also another time. Dinoland brings guests into a town built up after the discovery of fossils. Shortly after the discovery, the Dino Institute was built and Chester and Hester turned their gas station into a midway extravaganza. With so many exciting and fun experiences waiting in Dinoland, guests love spending time there and enjoying all of the small details that make it so realistic. Found with many of the details are also hidden secrets for guests to discover and enjoy on a day in Disney’s Animal Kingdom. Here are seven hidden secrets in Dinoland in Walt Disney World.

The most popular attraction in Dinoland is Dinosaur which brings guests into the famed Dino Institute where the technology to travel back has been developed. Guests soon find themselves strapped into Time Rovers and heading back in time dangerously close to the massive asteroid impact. While on the hunt for one particular dinosaur to bring back to modern times, guests end up on an epic adventure complete with face to face dinosaur interactions. While approaching the loading area of the attraction, guests move down a flight of stairs and pass underneath an interesting trio of colorful pipes that pay homage to the original sponsor of the attraction. The pipes are red, yellow, and white and feature complicated chemical formulas. Those who remember that the original sponsor of the attraction was McDonald’s will realize that the pipes actually represent ketchup, mustard, and mayonnaise!

When Dinosaur first opened its doors to guests it was titled Countdown to Extinction and was renamed after the 2000 release of the Disney animated movie Dinosaur. After the renaming of the attraction, most of the signs and references to the original title were removed however one still exists today. After boarding their Time Rovers guests move towards a designated seat belt check area and can spot a tribute to the original attraction on a nearby wall. Guests should look for a section of the wall spray painted with the following: “SECTOR CTX-WDI-AK98.” CTX stands for the abbreviation for the original title Countdown to Extinction, WDI stands for Walt Disney Imagineering, and AK98 stands for Animal Kingdom and its opening year of 1998.

After moving past the seat belt check area on Dinosaur, guests enter into a tunnel in which the actual time traveling occurs. The Time Rover suddenly begins to sway, strobe lights flash, odd noises occur, and futuristic metal on the walls sparks the technology. While the interesting metal on the walls look futuristic, Imagineers looked to a normal household item to enhance the area. The curving metal fixtures on the walls were inspired by the inside pieces of an everyday toaster and enlarged to fit the area.

Chester and Hester have been some of the longest residents of Dinoland as they resided there running a gas station before the discovery of fossils. When the dinosaur boom occurred, Chester and Hester cashed in and decided to turn their gas station into a gift shop and build a large midway area complete with attractions. Chester and Hester’s Din-O-Rama features an asphalt highway circling two attractions, a zany gift shop, and plenty of carnival style games. Along the side of the highway are several signs declaring it as Diggs County US 498. Diggs County is an obvious pun on the archaeological digging that occurs in the area and 498 pays homage to the opening date of Disney’s Animal Kingdom in April of 1998.

Guests who wander along the highway of Chester and Hester’s Din-O-Rama feel as though they are actually traveling along a highway that was repurposed after the dinosaurs were discovered. While the road looks like real asphalt, Imagineers realized that having asphalt on the ground with the Florida sun would result in guests getting stuck to the melting road. Instead, Imagineers used concrete and strategically carved out the cracks and lines in the road to make it appear like actual asphalt without the melting.

Near the courtyard in front of Dinosaur, guests can have an up close encounter with a full size dinosaur. In South Dakota in 1990, the most complete skeleton of a tyrannosaurus rex ever was discovered. Named Sue after the woman who made the discovery, the dinosaur is one of the only ones ever to be discovered with an arm intact, allowing paleontologists to learn plenty about how the creature behaved. Sue currently resides in the Chicago Field Museum, but when Disney’s Animal Kingdom opened in 1998 Imagineers were able to display some of her bones for guests to enjoy. The dinosaur that currently stands guard outside of Dinosaur is an exact replica of Sue and a great photo opportunity for guests.

A great place for kids and kids at heart to spend time in Dinoland is the Boneyard where they can dig right into the sand to discover fossils just like the paleontologists at the Dino Institute. While the sign for the Boneyard looks like a massive fossil that was dug up and repurposed, it actually is a geographical representation of Disney’s Animal Kingdom. Guests who look closely will notice that the sign is the exact outline of the park, sans Camp Minnie Mickey which was closed to make room for the upcoming Avatar area. Guests should look for a small letter ‘N’ which points towards north to be able to see the outline of the park properly.