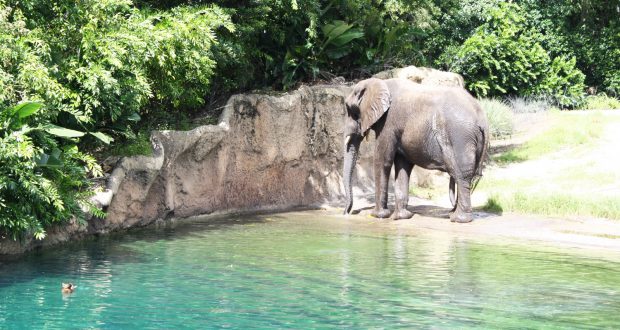 When guests visit Walt Disney World, they love to spend time in the four theme parks especially Disney’s Animal Kingdom. The park is the largest of the four and focuses on a celebration of the environment that strives to teach guests the importance of conservation. Disney’s Animal Kingdom features beautiful landscaping and themed areas in addition to amazing attractions, live entertainment, dining, shopping, and scenery. Despite so many fantastic experiences to enjoy in the park, some guests still consider Disney’s Animal Kingdom a half day park, however there is definitely enough to enjoy to fill a whole day there. Here are seven reasons why guests love staying at Disney’s Animal Kingdom.

One of the most beloved attractions in Disney’s Animal Kingdom can be found in the village of Harambe in the Africa section of the park. Kilimanjaro Safaris invites guests on a two week safari in the Harambe Reserve where they can enjoy up close experiences with animals including giraffes, elephants, cheetahs, lions, flamingos, and zebras. Guests especially love visiting Kilimanjaro Safaris time and time again as each experience is completely unique thanks to the unpredictable nature of live animals. Some of the best times to visit the attraction are first thing in the morning and late afternoon as the temperatures are cooler and meals are served making the animals more active and visible.

Disney’s Animal Kingdom also features plenty of thrilling attractions including one which brings guests deep into mythical territory. Expedition Everest can be found in the Asia section of the park and begins as a serene tea train tour. Guests soon find themselves deep within the Forbidden Mountain where they come face to face with the Yeti and scramble to escape his clutches.

Another thrilling attraction in Disney’s Animal Kingdom can be found in Dinoland and transports guests back in time. Dinosaur invites guests into the Dino Institute where the technology to travel back to the time of the dinosaurs has been developed. Guests are supposed to enjoy a quiet tour though a safe period of prehistoric times, but find themselves dangerously close to a massive asteroid impact while trying to find a particular dinosaur to bring back to modern times.

Guests who are looking to cool off on hot days in the park can head over to Kali River Rapids in the Asia section of the park. The attraction features family style rafts which bring guests down the Chakranadi River and deep into the jungle where they suddenly discover the destruction of illegal deforestation. Along the way guests are guaranteed to get soaking wet and they are well advised to use the free rental lockers nearby to stow any valuables.

3. Festival of the Lion King –

One of the most popular shows in all of Walt Disney World can be found right near Kilimanjaro Safaris in the Africa section of Disney’s Animal Kingdom. The Festival of the Lion King is housed in the Harambe Theater and retells the classic Disney animated film The Lion King through song, familiar characters, acrobatics, aerial ballet, fire dancing, and more. Guests are sure to be completely enthralled with the beautiful performance but should check their times guides as the show only runs several times per day.

Another amazing live performance can be found in the Theater in the Wild in Dinoland. Finding Nemo – The Musical invites guests to relive the smash Pixar hit Finding Nemo as told through larger than life puppets representing beloved characters like Nemo, Dory, Marlin, and Crush. Guests can enjoy the performance and will find themselves singing along to the loveable song “Big Blue World” which was written especially for Walt Disney World. Like the Festival of the Lion King, Finding Nemo – The Musical only runs several times each day so guests should consult a times guide when entering into the park.

In addition to the attractions and live performances, Disney’s Animal Kingdom is home to a pair of trails which allow guests to step away from the hustle and bustle of the main pathways and enjoy tranquil areas full of beautiful details and exotic animals. The Pangani Forest Exploration Trail is found near the exit of Kilimanjaro Safaris and is a self-guided walking trail. Guests can explore the beautiful pathways at their own pace and spend plenty of time watching gorillas frolic and play in a massive hilly habitat full of lush vegetation and waterfalls. Guests can also enjoy exploring the Maharajah Jungle Trek which brings them through beautiful temple ruins and intricate details for up close views of animals including Asian tigers.