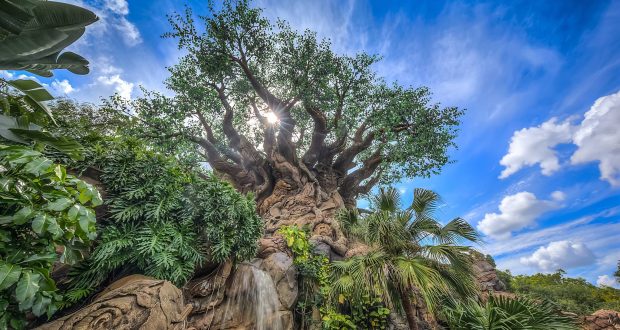 At the center of Animal Kingdom at Walt Disney World in Florida, the icon of the parks sits on Discovery Island. The beautiful Tree of Life can be seen from many locations inside Animal Kingdom. But this massive park icon is more than just iconic, and you realize just how amazing it is when you learn more about it. Here are 8 amazing things you might not have known about the Tree of Life.

8. It comes from humble beginnings.

Whether you’re across the park from the Tree of Life or standing at its base, the giant tree is quite the spectacle. But for all its glory, you might not expect that the enormous tree was actually engineered from a refitted oil platform. Imagineers knew the inner structure would have to be one that could withstand the elements, while providing a base on which to “build” the bark, branches and leaves of the tree that was designed to look like a baobab tree, a type of tree found in different parts of Africa.

The Tree of Life is no small thing—not by a long shot. It is 50 feet wide at its base and stands nearly 150 feet tall! No wonder its canopy can be seen from a distance at different locations around Animal Kingdom. 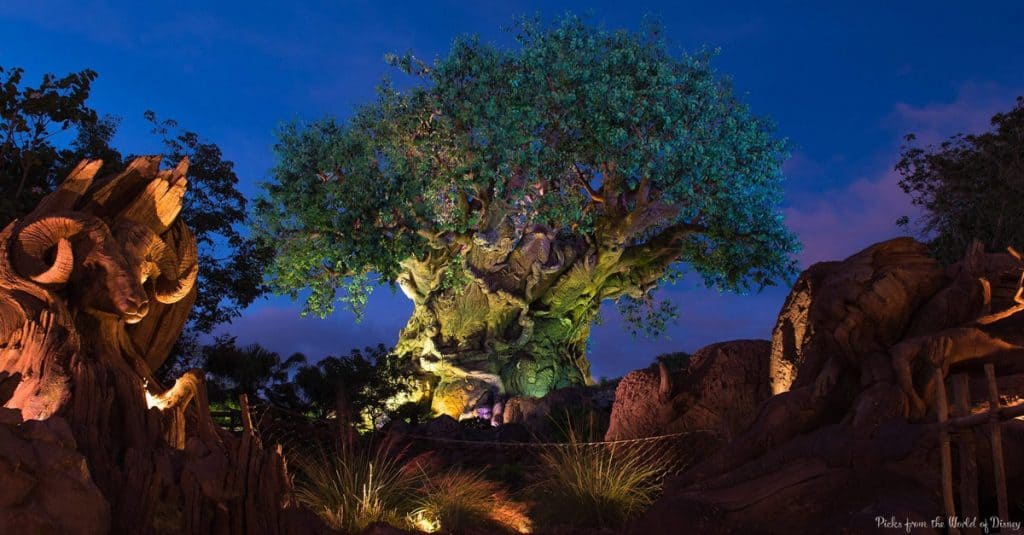 6. It is covered in carvings.

One of the most amazing and fascinating things about Animal Kingdom’s Tree of Life has got to be the carvings that decorate its trunk, roots and parts of its branches. More than 325 intricate carvings of animals and insects (living and extinct) can be found around the base of the Tree of Life, as well as up many of its branches. You can even find carvings along some of its exposed “roots.” The carvings include a scorpion, owl, dolphin, alligator, flamingo, ram, elephant, peacock, porcupine, tortoise and more.

4. There are trails surround its base.

You can get your cardio in as you explore Animal Kingdom’s Tree of Life. That’s because around the base of the park icon is a walking trail. Discovery Island Trails at the Tree of Life on Discovery Island is a great place for a leisurely walk around meandering paths that take Guests through lush landscapes, cave-like tunnels and even across wood bridges. Wildlife viewing is at its best at the base of the Tree of Life. Animals like white storks, Red Kangaroos, a Galapagos Tortoise, Macaws, Lappet Face Vultures and Asian Small-Clawed Otters make their homes here and the trail allows you to see some of them in their habitats. There are also observation stations along the trails that allow Guests a place to stop and take pictures of the lush vegetation and beautiful wildlife.

3. It houses an attraction.

Now that you know the Tree of Life is not a living, breathing tree and that it is a very strong structure, it might not surprise you as much to know that the huge icon also houses an attraction for Guests to enjoy. You’ll find the “It’s Tough to Be a Bug” attraction inside the Tree of Life at the Tree of Life Repertory Theater. This interactive 3D and special effects show is hosted by Flik—the ant from Disney/PIXAR’s A Bug’s Life. It was the first attraction at Disney World to open to the public before the theatrical release of the film that inspired it was finished, as it opened at Animal Kingdom six months before anyone could catch the film at the theater. As Guests walk into the theater to find a seat before the show, they are asked to put on a pair of 3D glasses. Then they are asked not to “sting, buzz or pollinate.” Yes, Guests are invited to become bugs and see the world through the eyes of insects for the duration of the show. “It’s Tough to Be a Bug” has a clever way of showing Guests how bugs of different kinds use survival techniques to stay alive on planet Earth. Hold your nose because the stink bug really stinks, and you might even be sprayed by a bug or two! You’ll leave with a better understanding of the life of a bug and how very tough it is to be one! 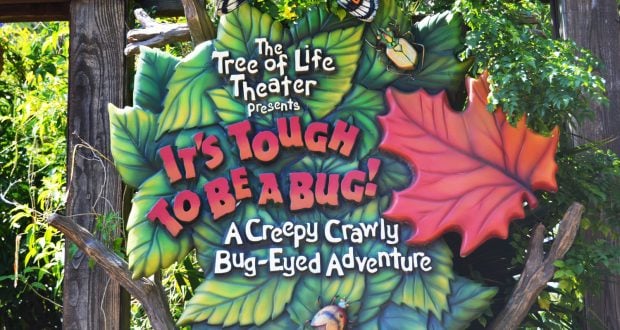 2. It serves as a screen for a nighttime show

Just after dusk, you can see the Tree of Life Awakenings show. It began in May of 2016 and is a projection mapping-type production during which projections of animals and scenes from nature are projected onto the tree. The show has four parts to it that are named on the Rivers of Light soundtrack CD from Disney—Journey, Rendezvous, Gift Giver and Disney Medley. 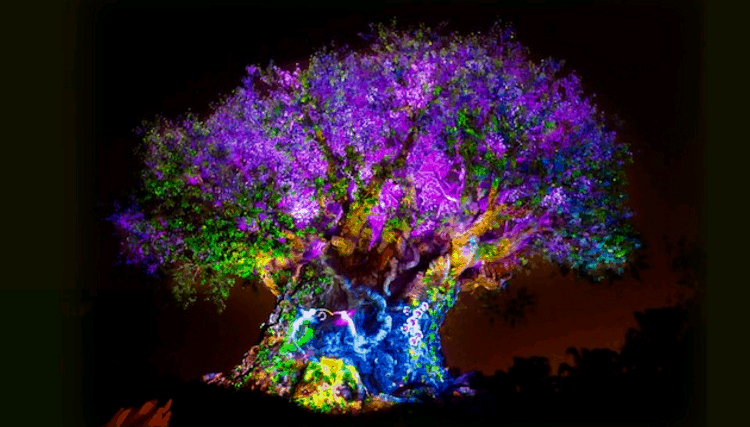 1. The leaves are not real.

No spoilers here—the tree isn’t real, so the leaves can’t be either. But they are some of the most impressive leaves we’ve ever heard of! The Tree of Life has 8,000 branches and over 102,000 leaves. Each leaf is over 12 inches long. The leaves are made of thermoplastic kynar, which is a flame-retardant substance that also stands strong against the elements. 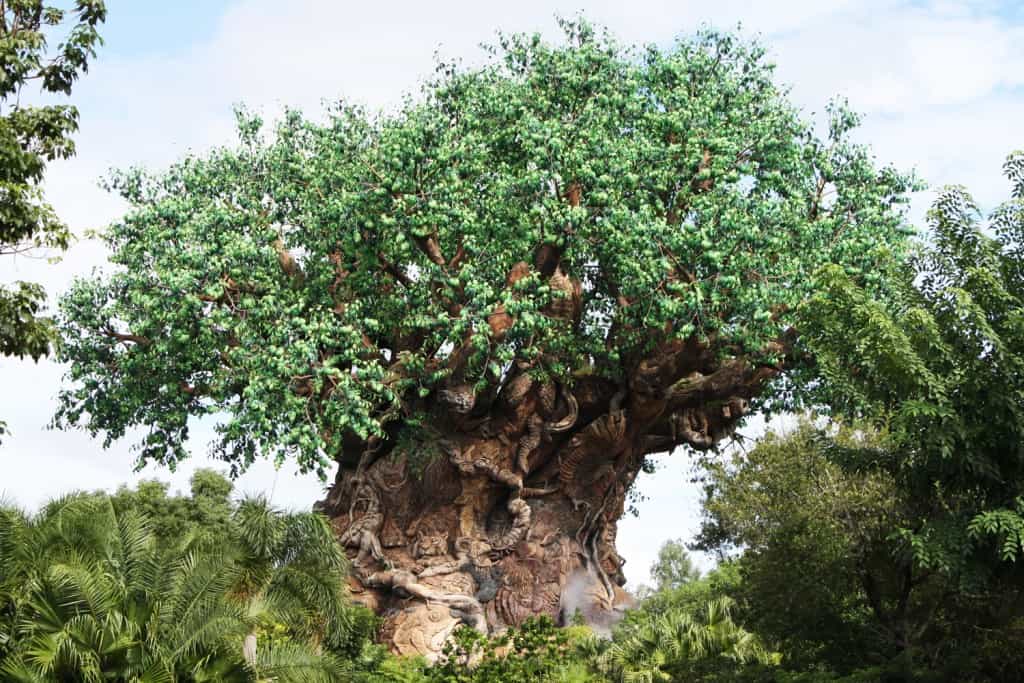