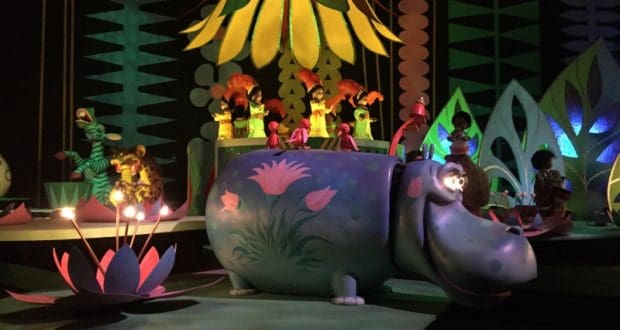 Whether you only on this ride once, or you take several voyages during your visit to the Magic Kingdom, the 10-minute Happiest Cruise That Ever Sailed will put a smile on your face and the song will inevitably be stuck in your head for the rest of the day. It’s accessible to all and a healthy dose of classic fun for every guest, both young and old. Fantasyland boasts many other exciting attractions that might pull your attention right past the colorful canopies of “it’s a small world”, but here are eight cool reasons why this ride deserves a spot on your must-do list.

“It’s a small world” debuted at the 1964-1965 New York World’s Fair. Walt Disney showcased this attraction as part of the UNICEF pavilion. The initial name for this unique boat ride was “Children of the World”, and over 10 million people bought a ticket to experience it at the Fair. After this success, it was moved to Disneyland, and has been part of every Magic Kingdom theme park around the world ever since. Walt Disney World’s version of this attraction opened in 1971 and was renovated in 2005.

Joyce Carlson had the pleasure of creating the dolls and costumes in this whimsical attraction. Each doll’s face is identical in appearance and shape, possibly to reinforce the unity theme among the world’s nations. Although I have never personally counted them, there are 289 dolls representing 6 different continents. As a tribute to her contributions, Joyce got her own window on Main Street U.S.A., so look for “Miss Joyce, Dollmaker for the World’ the next time you’re strolling down it. She also has a doll in her own likeness underneath the Eiffel Tower scene.

Tasked with writing a song using simple lyrics that could be translated into several languages, the Sherman Brothers penned the infamous song that accompanies guests as they sail around the world. The song is performed English, Italian, Japanese, Spanish, and Swedish and interestingly enough, was never copyrighted. As the song goes, “there is just one moon and one golden sun”. See if you can spot the sun and moon present in each room.

4. A Quick Trip Around the World

“It’s a small world” takes guests on a voyage through rooms representing 29 different countries and areas of the world. The background layouts were created by Mary Blair, the famous Imagineer. Mary’s use of color and youthful images make this attraction instantly recognized around the world. Sharp eyed-guests will notice that every quarter hour, the white-and gold-painted clock in the loading area will put on a show.

The ride system used to transport the passenger boats through the waterways of the ride proved to be very efficient at getting guests on and off. Based on this, Disney decided to create additional water attractions using the same operating system.

Hidden Mickey hunters will be very busy during a cruise through “it’s a small world”. One of my favorites can be found towards the end of the Africa room. Look for the vines above the giraffes, as the purples leaves are shaped like a Mickey head. As you float into the South Pacific room, check out the koalas hanging on the tree. There is a distinctive hidden mickey on the back of the blue koala’s head.

The Disneyland version is slightly different than the one guests experience in Walt Disney World. 37 familiar Disney characters were introduced throughout the Disneyland ride beginning in 2008. Aladdin and Jasmine can be found in the Middle Eastern region, while Alice and the White Rabbit take up residence in the area representing England. The Africa region is the home for Simba, Pumbaa, and Timon.

The very last scene in this attraction is full of good-byes. Colorful signs announcing the phrase in many languages are displayed right before the boat docks. Check out the recent addition of the electronic sign that personalizes your ride. See how many languages you know.