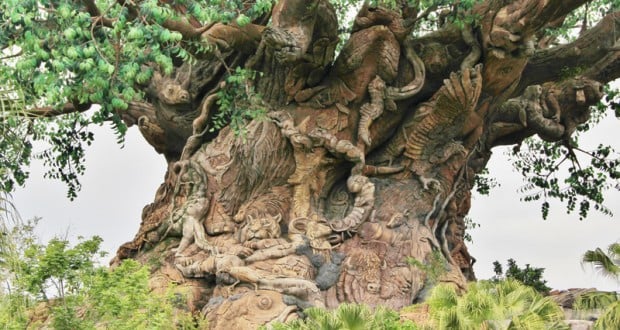 Getting to Animal Kingdom early (preferably right at park opening) is a must for me. There are a couple of reasons for this: The animals are the most active in the morning, so to increase your chances of seeing as many animals while they’re out and about, you’ll want to get to the park early, and therefore do the animal attractions early. Animal Kingdom also typically has shorter hours than the other parks, so if you’re looking to spend an entire day here, the best way to do so is to stay in the park from open to close. And of course, like any theme park, the crowds are smaller in the morning, making it an ideal time to visit (especially for a park that is not currently open later in the evening).

• Start in Africa and end in Dinoland

I would recommend going right towards Africa upon arriving in Animal Kingdom. By doing this, you’ll be able to ride Kilimanjaro Safari while the animals are the most active, and be able to see the animals on the Pangani Forest Exploration Trail since it is located right there as well. In addition to the animals’ activity, the safari attraction draws some of the largest crowds in the park, resulting in longer wait times as the day goes on. By ending in Dinoland, you’re not going to be missing out on animals, because the animals in Dinoland are long extinct. It’s also a pretty area at night, so if you are able to be there when it’s dark out and the animal attractions are already closed, Dinoland is a great place to be.

Animal Kingdom Lodge is one of the most beautifully designed and detailed resorts at Walt Disney World. Even if you aren’t staying there, I would suggest going there after visiting the park at least once during your trip. This resort is home to some of my favorite restaurants, like Boma and Sanaa, and gift shops, the Zawadi Marketplace. In addition, you are able to view the savannah from balconies located off the lobby, and there are plenty of artifacts to look at in the exhibit cases in the lobby as well.

• Have at least one meal

In my opinion, Animal Kingdom has some of the most underrated restaurants. For table service, be sure to check out Yak and Yeti or Tusker House Restaurant, both of which are delicious, and serve foods that are not common to the rest of Walt Disney World. (I would skip the Rainforest Café because I have one in my local mall, and I’d rather try new things on vacation, but to each their own). And try the quick service locations too! My favorites include the Harambe Marketplace, which has a number of different options and is conveniently located in Africa, and Flame Tree Barbeque, which is home to the best quick service ribs at Walt Disney World if you ask me.

Many of the characters at Animal Kingdom are not often seen in other parks, so if you enjoy meeting characters, this is a great time to do so! Pocahontas, Dug, and Russell for instance, are usually only found in Animal Kingdom. In addition, characters like Goofy, Pluto, Donald, and Mickey and Minnie, are out for meet and greets in this park with outfits themed to their areas, making for some really fun photo ops!

When you plan on seeing a show in Walt Disney World, Hollywood Studios might be the park that initially comes to mind. Disney’s Animal Kingdom however is actually home to two of my favorite live Disney shows—Finding Nemo the Musical and the Festival of the Lion King. If you’re interested in seeing a more educational show, that can still be fun and entertaining for the whole family, then be sure to check out Flights of Wonder, which to me is one of the most underrated shows at Walt Disney World.

• Take in the details

One of the biggest mistakes guests make when they go to Animal Kingdom is that they do not slow down and allow themselves to take in all of the wonderful details in the park. So much thought and research went into designing the parks, that you should definitely look around closely at all of the different areas and let yourself take everything in. Confused about the storyline in an area? Just ask a cast member, and they’ll be happy to explain the backstory behind their part of the park to you.

I never understand why so many people visit Disney’s Animal Kingdom, and yet skip out on seeing the animals. I know additional walking is probably the last thing you want to do on a Disney vacation, but walking all of the trails and seeing the animals in the park is one of the things that makes a visit to Animal Kingdom so special.