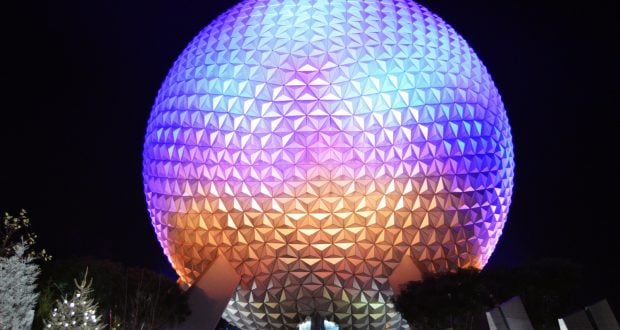 Epcot is the favorite Walt Disney World theme park of many guests thanks to its unique and entertaining attractions, dining, shopping, and live performances. The park is divided in half with Future World in the front celebrating nature and technology and World Showcase in the rear featuring eleven different pavilions highlighting countries from around the world. With so many amazing things to experience in Epcot, it is no wonder why guests love to spend so much time there. While guests may think that they are familiar with all there is to see in Epcot, they might be overlooking some amazing details, secrets, and facts about the park. From Hidden Mickeys and familiar faces to historical figures and unique dedications, there are plenty of secrets and facts in Epcot waiting to be discovered. Here are the top eight facts and secrets about Walt Disney World’s Epcot for guests to enjoy!

The most recognizable attraction in Epcot is Spaceship Earth found just inside the main entrance of the park in Future World. Spaceship Earth brings guests from the beginning of time to modern day to celebrate the history of communication through scenes depicting important moments like the burning of Rome and man landing on the moon. Since Spaceship Earth is home to so many audio-animatronic figures, Imagineers decided that it would be easiest to reuse already existing molds for some of the characters found throughout the attraction. Many preexisting audio-animatronic molds were borrowed from the Hall of Presidents in the Magic Kingdom, resulting in some familiar faces throughout Spaceship Earth. Guests who enjoy a ride on the attraction should be on the lookout for John Adams as a monk, James Buchanan as Gutenberg, Teddy Roosevelt as a Roman, and William Taft as an Egyptian.

Journey into Imagination with Figment is an often overlooked attraction in Epcot’s Future World and it has seen several different incarnations over the years. When the attraction originally opened, it starred Figment, the lovable purple dragon, and his friend Dreamfinder who traveled around the world collecting bits of imagination. While Dreamfinder can sadly no longer be found on the attraction today, his vehicle, the Dreamcatcher, can be spotted on display near the ceiling in Mouse Gear.

The France Pavilion in Epcot’s World Showcase is home to charming architecture, a recreation of the Eiffel Tower, delicious cuisine, and a beautiful film that guests are sure to love. Impressions de France brings guests on a journey through the beautiful locations of France set to classical compositions by French composers. While the film is wonderful to enjoy, guests who look closely at the costumes of the female Cast Members who work at Impressions de France can notice a tribute to a beloved piece of art. The costumes were inspired by Edouard Manet’s painting “A Bar at the Folies-Bergere” and those who are familiar with the piece are sure to recognize the similarities.

5. Living with the Land’s Hidden Mickey —

Guests who pay a visit to The Land Pavilion in Future World should stop by Living with the Land for a wonderful experience which aims to teach guests all about the beauty and diversity of the land. The attraction brings guests on a gentle boat ride through several different environments and beautiful greenhouses filled with blooming vegetation. While moving through the greenhouses, guests should be on the lookout for two tables growing lettuce on either side of their boats. Depending on the day and the growth, guests can spot a Hidden Mickey on one of the tables- entirely made of lettuce!

Those who spend time wandering through World Showcase love to explore all that the China Pavilion has to offer. With the wonderful Reflections of China and amazing details, guests could spend all day taking it all in. One great detail which honors the history and culture of China can be found on the roof of the Nine Dragons Restaurant. A figure can be found sitting on one of the roof’s corners surrounded by animals. The figure represents Prince Min, a ruler from the third century who was killed for his cruelty. Chinese tradition calls for a representation of Prince Min in each town to warn of cruelty and that he be surrounded by animals preventing his escape.

One of the most patriotic experiences in all of Walt Disney World can be found in the America Pavilion in World Showcase. The American Adventure celebrates the story of the American people through music, artwork, history, photography, and audio-animatronics. Before entering into the main theater, guests can browse the first floor lobby of the attraction where paintings and inspirational quotes are on display. One painting in the lobby depicts a man speaking to a large crowd from the front of a store. Near the bottom of the painting, guests can spot a woman wearing a hat with flowers on it which come together to form a classic Hidden Mickey.

Many guests who wander through Epcot often end up walking right past the Fountain of Nations and not stopping to enjoy its beauty. The fountain is massive and puts on a show several times an hour which combines beautiful music and water cannons which bring it to life. While many guests might notice the Fountain of Nations in passing, they may not know the significance behind its dedication and name. The Fountain of Nations was dedicated shortly after Epcot officially opened and it featured several dozen nations from around the world symbolically pouring water from their homelands into the fountain to combine it as one.

One of the most thrilling attractions in Epcot is Mission: SPACE in Future World which blasts guests off on a daring adventure to Mars. Before the attraction existed, the space used to be home to the attraction Horizons which brought guests on a quirky tour of what the future could look like. While Horizons no longer exists today, its original logo can still be found in the center of the large rotating gravitational wheel in Mission: SPACE’s queue.