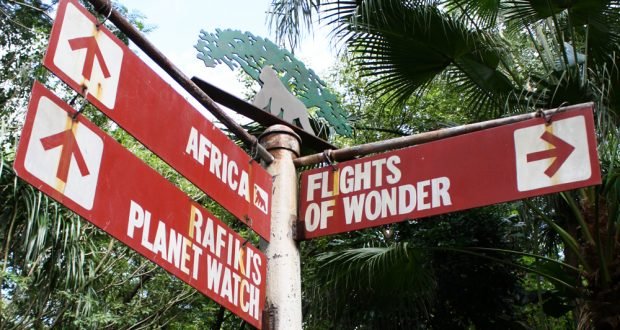 Guests who visit Walt Disney World love spending time in Disney’s Animal Kingdom enjoying the beautiful sights and amazing experiences. The park celebrates nature and the environment and helps to teach guests the importance of protecting them. Guests who spend time in Disney’s Animal Kingdom can enjoy experiences like traveling back to prehistoric times, encountering the fabled Yeti, going on an African safari, shrinking down to the size of a bug, and reliving the classic tales of The Lion King and Finding Nemo. With so many amazing experiences to be had, guests love spending lots of time in the park and feel as though they know a lot about it. However, there are plenty of hidden details and secrets throughout Disney’s Animal Kingdom that guests might not know about! Some of these secrets are difficult to find and some are hidden in plain sight, but guests love spotting them all while enjoying a Walt Disney World vacation. Here are eight of the best kept secrets at Disney’s Animal Kingdom.

Guests who visit Dinosaur in the Dinoland section of Disney’s Animal Kingdom are invited into the Dino Institute where the technology to travel back in time has been developed. Guests soon find themselves heading back dangerously close to the impact of a massive asteroid to bring a dinosaur back with them to modern times. Before boarding the thrilling attraction, guests move down a stairwell as they approach the loading area. Overhead nearby is a trio of pipes that are red, yellow, and white and feature complicated chemical formulas. The pipes represent ketchup, mustard, and mayonnaise and are remnants from when McDonald’s was the sponsor of Dinosaur.

The icon of Disney’s Animal Kingdom is the massive Tree of Life which is intricately carved with hundreds of beautifully detailed animals and insects. Since the structure is so large and also houses the attraction It’s Tough To Be A Bug, Imagineers needed to be creative when figuring out a support system for inside the bark. Guests enjoying views of the Tree of Life might not realize that a massive oil rig forms the support structure inside making it the perfect shape to look just like a tree.

One Imagineer had a massive role in the planning, creation, and development of Disney’s Animal Kingdom and a tribute to him can be found in the Africa section of the park. Joe Rohde was instrumental in shaping the park to be what it is today, and guests who look closely in the village of Harambe can spot a sign honoring him which reads “JORODI” and is advertising the sale of masks and beads.

Guests who wander through Dinoland pass through Chester & Hester’s Din-O-Rama which is made to look like a roadside carnival complete with midway games and attractions. Since the area is supposed to be along an old highway, the walkways are made up of what appears to be aging and cracking asphalt. While guests might think that the asphalt is real, they are mistaken! Imagineers knew that asphalt plus the hot Florida sun would result in a sticky walkway that guests would perpetually get stuck to. Instead, Imagineers crafted walkways to look just like asphalt without using the real thing.

Guests who are brave enough to conquer the Forbidden Mountain can enjoy Expedition Everest where they come face to face with the fabled Yeti. Before reaching the loading area of the attraction, guests pass through a final room with pictures depicting the various individuals who would normally accompany a mountaineering expedition. While the individuals look random, one of them is actually Disney Imagineer Frank Wells who was an avid mountaineer in real life. Wells also has a window which can be found on the third story of Main Street in the Magic Kingdom, allowing him to continue his love of climbing high.

Guests who spend time in the Asia section of the park should definitely enjoy some time in the Pangani Forest Exploration Trail. The self-guided walking tour allows guests to enjoy beautiful scenery, animals, and plant life while exploring at their own pace. The highlight of the trail is a massive gorilla habitat complete with rolling green hills and flowing waterfalls. When the attraction first opened, it was called Gorilla Falls and guests who look closely can still spot a crate with that name on it along the way.

One of the most thrilling attractions in Disney’s Animal Kingdom is Kali River Rapids which also guarantees to leave guests soaking wet! The attraction invites guests to board family style rafts and take to the Chakranadi River where they soon discover the devastation of illegal deforestation. At the top of the first large lift hill, guests can enjoy a massive rock formation that looks pretty, but also features a hidden tiger face protruding from it!

Guests who stop to dig up some fossils in the Boneyard are sure to have a blast uncovering some wonderful dinosaur history. The sign for the area resembles a massive dinosaur bone, and while guests might just assume that the sign is randomly shaped, it actually is a map of the park! The Boneyard sign mirrors the shape of Disney’s Animal Kingdom before the removal of Camp Minnie Mickey and even features a symbol for North to orient guests!