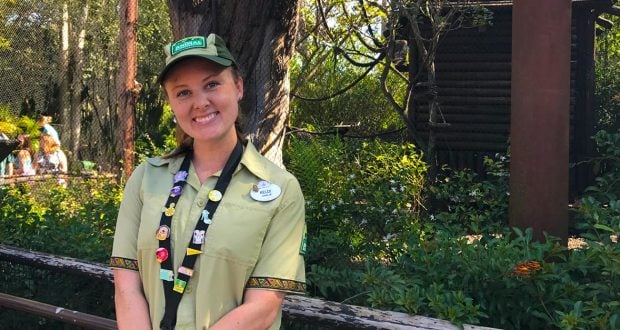 If you’re from a part of the country that actually has a winter, living in Florida in general is probably very appealing to you. While the winters do get “cold” in Orlando, the 40s may not actually be cold to you depending on where you’re coming from. As a New Englander, there were some nights during the year I spent in Orlando that I was “cold” but for the most part I was a little chilly and a light jacket or windbreaker would suffice. (Just beware that the longer you stay in Orlando, the more adapted your body will become to the warm temperatures!)

2. Complimentary admission to the theme parks

The most talked about perk of working for Disney of course is complimentary admission into the theme parks. Of course, this does come with blackout days, but these days tend to be during school breaks and major holidays when you probably wouldn’t want to be visiting the parks anyway. Complimentary admission to the parks allows you to explore all of the details the resort has to offer at your leisure. You can also just pop into the Magic Kingdom to get a hot dog at Casey’s or ride Space Mountain a few times before turning in for the night. Since cast members can visit the parks whenever they want, they never feel the pressure to get everything done during one visit like you often feel on vacation.

Disney cast members are able to take advantage of a number of discounts including park tickets and annual passes for friends and family, merchandise, dining, resorts, cruises, and even Broadway shows and other Disney vacation experiences. There are also cast member-exclusive stores that offer highly discounted park merchandise and other products from around the resort for very low prices. In addition to the discounts their own company offers, plenty of businesses around the Orlando area offer discounts to theme park cast members, and restaurants and nightclubs often hold industry nights during the week since so many Orlando residents do not have weekends off.

From soft openings for upcoming attractions to after hours parties and backstage tours, there are plenty of events that are offered only to cast members working at the Walt Disney World Resort. Some of my favorite memories from working at Walt Disney World are actually from the after hours Halloween event I was able to attend in my home park, and a couple of backstage tours of attractions that I would have never been able to take part in as a guest.

If you’re looking for a company that will help you give back, the Walt Disney Company may be a perfect fit. Disney’s “Voluntears” program makes it easy for cast members to get involved with whatever line of volunteer work they are interested in. The company is also well represented by cast members at Orlando Pride events and at the Give the Kids the World Village, the resort that hosts Make a Wish kids during their visits to Walt Disney World.

6. Get to know people from all over the world

One of the most rewarding things about working at the Walt Disney World Resort is the ability to meet people from all over the world with each shift. Of course, cast members interact with thousands of guests from across the globe each day, but they are also able to work alongside a crew of international coworkers. During my time working in attractions, I enjoyed the potlucks we hosted at work with the huge variety of food with so many different cultural backgrounds represented, and I loved having so many coworkers who knew different languages. The vast majority of the times when a guest asked me for help in a language I did not understand, it only took a few seconds to track down a coworker who would be able to help.

7. Allowed to have fun on the job

Disney cast members are allowed to have fun on the job! Whether they are adding some improv into their Jungle Cruise jokes, or just being silly while playing with hula hoops before a show opens, this is one job where you are truly encouraged to have fun. From telling jokes, to playing games, even the occasional photobomb (all in good fun of course) cast members are always able to have a good time during their shift.

One of the first things cast members learn in training to work for the company is that they create happiness- and it’s true! You may not be thinking in this mindset as a guest, but being a cast member truly means that you are able to create happiness for guests during their visits to the resort. Whether it be as simple as blowing bubbles with kids outside a shop or going above and beyond with magical moments, or even just smiling and talking to guests, it’s the one job where simply doing your job will make your guests happy.