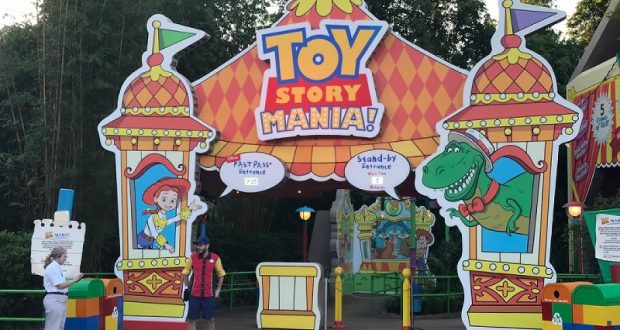 Toy Story Land has been opened at Disney’s Hollywood Studios now for almost 1 ½ years, and it just gets better and better each time we visit. The additions of two new attractions—Slinky Dog Dash and Alien Swirling Saucers—have proven invaluable in only adding to the fun and excitement at Hollywood Studios. But it’s often the “oldies but goodies” that are the best, and that’s certainly the case with Toy Story Mania. Here are a few things you need to know about this super fun, super popular attraction at Toy Story Land.

8. The entrance was once in different place.

It’s true. Before Toy Story Land opened, the entrance to the famed attraction was in the area that was called Pixar Place. Guests entered the attraction through the FastPass+ and stand-by queues in the front of the building before heading into the area decorated in toys, games, Crayolas and more. Now that Toy Story Land is open, Guests enter through a truly grand entrance as you enter the land and curve around to the left.

7. Get your FastPass+ early!

Toy Story Mania is one of the most popular attractions at the Walt Disney World Resort. For this reason, it’s usually a good idea to secure a FastPass+ time so you can enjoy the attraction with little to no wait time in the queue. This is especially important during peak seasons in the parks.

Ok, so you didn’t get your FastPass+ for Toy Story Mania. Take heart! All hope is not lost. No matter what you do, don’t skip this attraction because you don’t have a FastPass+, and this is for two reasons. First, it’s too epic an attraction to miss out on, and second, the queue is interactive and fun—for kids and adults alike! If you end up waiting in the Toy Story Mania queue, just take a few minutes to look at all the toy-inspired artwork on the walls and all the 3D objects along the winding queue.

4. The area surrounding the attraction is fun too!

The fun begins before you ever even enter the building that houses the Toy Story Mania attraction! As you approach the FastPass+ and stand-by entrances at the very front of the attraction, take a step back and look above you. You’ll notice all kinds of fun surprises! The entire “storefront” of the attraction is created to look like cardboard cutouts. (You’ll notice the trademark zigzags that you find when you cut into cardboard as you look up at the entrance to the attraction.) Look all around you at the bright colors, the nearby blocks and even a huge Tinker Toy creation to your right. Take it all in—you just might miss something!

2. You won’t even mind leaving when the ride is over!

That’s because once you have to disembark from the ride, the magic continues! The entire walk away from the attraction once you leave the building that houses it is magical! You’ll continue to feel that you’ve shrunk to the size of a toy as you walk past a “fence” made of pastel-colored popsicle sticks, past green army men that are almost your size and more! It’s so much fun—even when you’re leaving!

1. The attraction is just as epic as ever—it’s better than ever!

Imagine an attraction you can enjoy with friends and family—the more the merrier—one in which you can enjoy five different carnival-type games and try your hand at earning bragging rights for the most points earned—all while being inspired by the characters and storyline of the Toy Story franchise. You don’t have to imagine! Toy Story Mania is all this and more. If you’ve never experienced it, be sure to do so the next time you visit Walt Disney World’s Hollywood Studios!