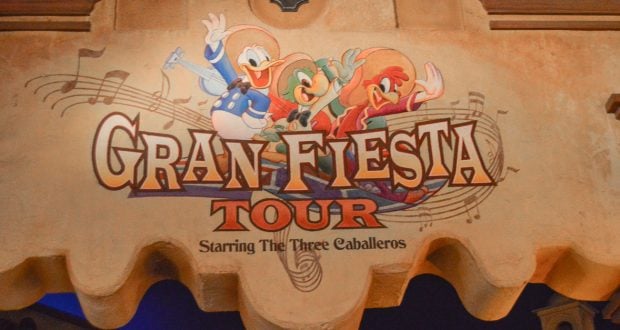 Gran Fiesta Tour is one of Disney World’s most underrated attractions. Sure, it’s not the most thrilling ride in the world, but there certainly is a lot to love about it. Whether you’re a fan of Donald and the gang or you are enthralled with the Mexican culture, you’re sure to find something to love about this gentle yet entertaining boat ride. Next time you’re in the Mexico Pavilion of Epcot’s World Showcase, give it a try and see for yourself! Here are some cool facts about the ride to think about until then.

Many people ride the Three Caballeros multiple times without ever even realizing the ride is based on a movie. The Three Caballeros was made in 1944 and was actually quite innovative for its time. The movie went over quite well and was nominated for two academy awards. Unfortunately, it is practically unknown by the public at this point. Still, we think it’s a movie worth watching, especially just before a trip to Epcot and the fun Gran Fiesta Tour attraction.

2. Not All the Caballeros are From Mexico

Although this attraction is located in the Mexico pavilion, not all of the ride’s featured characters are from Mexico. In fact, Panchito Pistoles is the only one of the three birds who hails from the pavilion’s featured country. Meanwhile Donald is a US citizen and their buddy Jose calls Brazil his home. This is a bit odd, but it does seem to work.

3. The Ride Didn’t Always Have So Much Character

When the Mexico pavilion first opened there were no cartoon characters to be found on the pavilion’s ride. At that point, the ride was called El Rio de Tiempo and was focused purely on Mexican culture. However, when the ride began to decline in popularity, Disney saw the need to make it more appealing and familiar to guests, leading to the addition of Donald, Jose, and Panchito.

4. You’ve Seen Those Kids Somewhere Before

During one point in the attraction, guests are treated to a big street party scene. If the kids in this scene look familiar to you, that’s probably because you’ve seen them before. The cute child animatronics in Gran Fiesta Tour were made exactly like the kids in “It’s a Small World”. This simple style of animatronic is relatively easy to accomplish and gives an adorable end result, making it ideal for certain attractions.

5. Changes Were Made to the Original Plans

The original plan was for the ride in the Mexico pavilion to open after the opening of the park. It was going to be a fairly long ride, with some outdoor sections in addition to the indoor parts. However, because many other attractions were experiencing delays and would not be able to open along with the rest of Epcot, Imagineers had to rethink the ride in order to have it ready in time for the grand opening. It ended up much shorter than it would have been otherwise, and we do wonder what the attraction may have been Iike had the designers had the extra time they originally wanted.

6. The Bird Animatronics are Hand-Me-Downs

Toward the end of the ride, you’ll notice the Three Caballeros performing onstage under a firework-lit sky. However, this performance was not always in place. The birds were actually added in 2015 and are in fact hand-me-downs from the now-defunct Mickey Mouse Revue, and were some of the first animatronics to be made for Disney World.

Many of your favorite Disney parks attractions have sisters in other Disney parks. Not this one though! Gran Fiesta Tour Starring the Three Caballeros is a one-of-a-kind ride, meaning it’s unique to Florida and can’t be seen anywhere else in the world.

8. Watch for the Piñata

As you enter the street party scene, be sure to keep an eye out for the piñata. You’ll probably notice that he seems a bit familiar, and will likely get a kick out of who the party item is modeled after.

As you can see, we really do think Gran Fiesta Tour Starring the Three Caballeros is a great ride. Perhaps knowing these bits of trivia going in, you’ll be able to appreciate it just as much as we do!