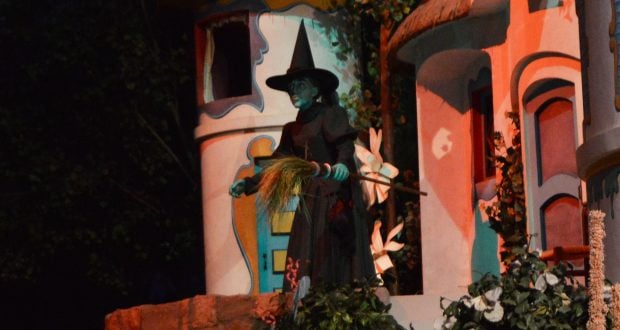 1. Hand & Foot Prints — Many guests who head for The Great Movie Ride immediately enter into the queue which can be found on the right hand side of the front of the building. However, by entering immediately into the queue, many guests completely miss out on the wonderful courtyard found centered in the front of the building. Just like Grauman’s Chinese Theater in Hollywood, the Disney’s Hollywood Studios version features concrete squares with the hand and foot prints of some of the most iconic and beloved Hollywood and Disney stars. Guests who are fans of the movies definitely need to take some time and explore these wonderful details!

2. Hidden Minnie — Once inside The Great Movie Ride, guests move through a screening room into the massive loading area. On the left hand side of the attraction vehicles, there is a large mural depicting the Hollywood Hills at night. While the mural is home to many wonderful details, guests should be on the lookout for a cluster of palm trees. Close by is a dark silhouette that forms a Hidden Minnie in profile! The easiest way to spot her is by looking for her bow!

3. Alien’s Crew List — The Alien scene on The Great Movie Ride features not only the title creature but Sigourney Weaver as well. With plenty of futuristic details and parts of the ship Nostromo that have been torn apart, there is a lot of detail to take in in the Alien scene. Guests who are seated on the left hand side of the attraction vehicle should look close to the floor to spot a crew list for the ship. The names on the crew list are those of Imagineers who helped to make The Great Movie Ride a reality, and their current statuses are pretty humorous!

4. Half A Plane — One of the most beloved Hollywood films of all time is Casablanca and guests can enjoy feeling as though they are truly in the film in the iconic airport scene. While passing by Rick and Ilsa, guests will notice the front of a plane ready to whisk her away. Guests can’t see the rear of the plane because it is located over in the lush vegetation of the Jungle Cruise over in the Magic Kingdom’s Adventureland.

5. Fantasia’s History — One scene of The Great Movie Ride brings guests into a rounded dark tunnel like room that simulates the Sorcerer Mickey segment featured in the Disney animated classic Fantasia. While the scene seems perfect, it was originally intended to portray an entire other film! The scene was originally supposed to recreate the tornado from The Wizard of Oz, leaving guests in Oz with the Munchkins in the next scene, however contract obligations only allowed Disney to use two scenes from the iconic film. Thus, the tornado scene was reimagined to showcase Fantasia.

6. Hidden Mickey & Donald — In the scene depicting the famous moment from Indiana Jones and the Raiders of the Lost Ark where guests can spot Indy uncovering the ark, there are several hidden characters for guests to find. Instead of looking to the right hand side of the scene towards Indy, guests should look to the left to spot a wall filled with hieroglyphics. One stone on the wall features a Hidden Mickey dressed as a pharaoh and a Hidden Donald serving him!

7. Hidden Droids — Guests who continue to search through the hieroglyphics in the Indiana Jones and the Raiders of the Lost Ark scene can also spot two familiar characters from another film created by George Lucas and Steven Spielberg. One square of stone features the famous droids C3PO and R2D2 hidden amongst other symbols!

8. License Plate History — One scene of The Great Movie Ride brings guests through the seedy underworld where all sorts of gangsters and classic moments can be found. Near the end of the scene, guests pass by a car on the right hand side that is filled with gangsters waiting to rob unsuspecting individuals. Guests who look loosely at the license plate of the vehicle will notice that it reads 021-429 which seems random, but pays homage to a day of gangster history. The date refers to February 14, 1929 which was the date of the infamous St. Valentine’s Day Massacre.