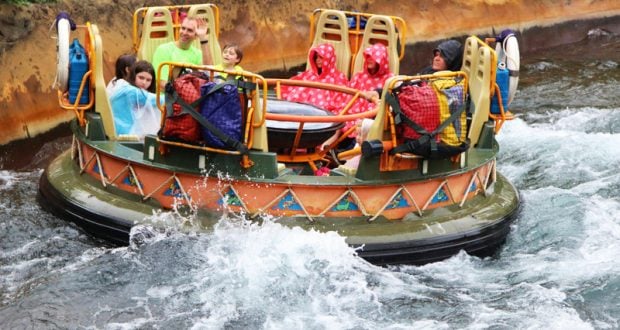 The youngest of the four theme parks at Walt Disney World—Animal Kingdom— celebrated its’ 21st anniversary this year. The park has been wildly popular among Guests since it first opened. That’s because Animal Kingdom is more than just a place to “see the animals” at Disney World. Instead, this theme park combines the animals you’d see at an expansive zoo with the animal education you’d get at a fun, immersive museum. Those are combined with the fun of heart-thumping thrill rides and show-stopping entertainment to give Guests an experience that’s unrivaled. Among those rides at Animal Kingdom is one of our favorites—Kali River Rapids—and if you’ve yet to experience this attraction, you’re in for a treat! Here are 8 things that make this fun water ride one of the best experiences to have at Animal Kingdom.

Kali River Rapids was the first ever river raft ride created by Walt Disney Imagineering. But one ride on a raft down the Chakranadi River at Animal Kingdom, and you won’t believe it could possibly be their first attempt at this type of ride. The attention to detail in the ride is fascinating, and the ride itself is a different experience each time you visit this attraction, thanks to the fast moving river and the spinning rafts. After Kali River Rapids opened in 1999, it was instantly successful, and Imagineering moved forward with their second river raft ride—Grizzly River Run, which opened at Disney’s California Adventure Park in 2001.

7. The queue is straight out of India.

The queue for Kali River Rapids is one that Guests don’t usually mind waiting in because they are intrigued by all of the artifacts that make them feel like they have been transported to India. There are Tibetan prayer flags, feline statues, prayer shrines, ancient ruins and other statues. If you have to wait in line, it’s nice to be entertained while you do so, and the queue for Kali River Rapids does just that!

6. Store your stuff—but in a different spot.

When Kali River Rapids first opened there was a round covered holder on each raft in which Guests could store their items, such as backpacks, cameras, diaper bags and other personal belongings. But Disney did away with those holders. Today when you visit Animal Kingdom and ride Kali River Rapids, you will have the opportunity to store your items in lockers that are located just to the left of the entrance to the ride. The first 80 minutes of storage is free, so unless you have an enormously long wait in the queue, you should be back to your locker before your time is up. Note: Don’t try to keep valuable items in your pockets, thinking that this will keep them dry; there are times when you get soaked on this ride—down to the insides of your pockets and further.

There is not only a chance or possibility of getting wet on this ride. It’s almost a guarantee that when you leave the ride, you’ll be wet somewhere on your body—and maybe on every part of your body! (It’s a water ride after all!) Don’t say we didn’t warn you!

Disney never cuts corners when developing and building an attraction. And they don’t cut corners when it comes to details. Kali River Rapids is an example of that. Did you know that each of the 20 rafts in which Guests ride has a name? It’s true! Next time you’re at Animal Kingdom, look to see the name of your raft. Current names include the Himalayan Hummer, Manaslu Slammer, Sherpa Surfer, Banyan Bay and the Kali Bumper Car.

3. There’s a message behind the Magic.

Not only is Kali River Rapids a fun family water attraction; it also presents a message. During the ride, after experiencing beautiful scenery, the scent of jasmine and powerful waterfalls, Guests are taken through a scene that was once full of beauty and life, but that has been destroyed by illegal logging and deforestation. Guests get a vivid visual reminder of the dangers of illegal practices in these places of beauty, trees and other foliage, and how destructive those practices can be.

2. Guests on the bridge can get you wet too!

The fun of this attraction continues even after you have disembarked from your raft. You will exit the attraction area by walking over a bridge under which the river runs. And so will every other Guest who disembarked before you—while you are still on your raft. Along the bridge, you will find a panel with buttons on it. Push those buttons and watch two elephant statues (that line the river beneath you) spray water from their trunks onto unsuspecting Guests. Perhaps it’s a good idea to wave and smile at other Guests on the bridge above you. Maybe they’ll be merciful and not spray your raft. Then again, they may relish the opportunity!

Along with other attractions like Expedition Everest, Dinosaur, Flight of Passage and Primeval Whirl, Kali River Rapids proves that Animal Kingdom is far more than just Disney World’s version of a zoo. On the contrary, Animal Kingdom is like an oasis of opportunities for animal encounters, as well as thrilling attractions and world-class entertainment. There are hundreds of species of animals inside the park, but animals aren’t the only things at Animal Kingdom. Come and see for yourself!