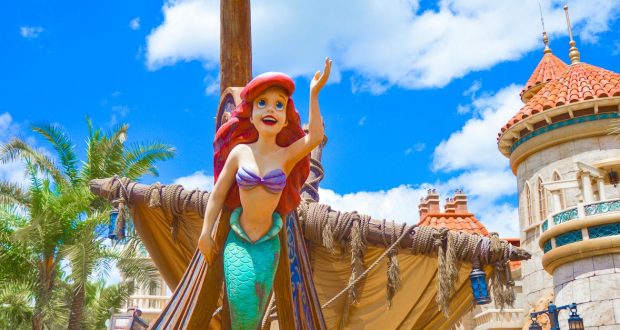 For mermaid fans young and old, Under the Sea – Journey of the Little Mermaid is a must-see attraction. In fact, we recommend hopping on this classic Disney dark ride even if you aren’t a huge mermaid fan. The bright colors, fun storytelling, and exciting music featured on the ride are enough to entertain anyone, making this the ideal ride for families with kids of varying ages. Want to learn more about this fun attraction before your trip to Disney? If so, you’re in luck! We recently learned some pretty cool facts,and we’re eager to share them with you and anyone else who might stumble upon our article.

Because they are mermaids, the characters in Under the Sea – Journey of the Little Mermaid show quite a bit more skin than your typical animatronic. For Disney’s Imagineers, this meant coming up with a way to make that skin look real and move in a way that was believable. In order to do this, the ingenious folks at Disney actually developed completely new technology, and honestly, we think they did a fabulous job!

All true Disney fans know that if you look closely while you make your way through the parks, you’ll probably find some hidden Mickeys—silhouettes of Mickey’s head hidden in plain sight. Under the Sea – Journey of the Little Mermaid actually has a number of these Mickey heads scattered throughout its queue, as well as the ride itself. Try looking in the rocks lining the walls of the queue area or the backs of the frogs in the “Kiss the Girl” scene. Of course, you could also try to see the ultimate hidden Mickey by visiting on Mickey’s birthday, November 18th. On this day at noon, the sun hits the rocks in the ride queue just right and shines a perfect Mickey head onto the floor below.

3. Years in the Making

Little Mermaid fans waited years for this ride. In fact, the concept was first being developed in the nineties. However, due to budget constraints, it couldn’t open alongside the rest of Disneyland Paris as originally planned. A concept video of that nineties version of the ride can be found as a bonus feature on the Platinum Edition of the Little Mermaid DVD. This version has a ride system closer to Peter Pan’s Flight and features a few different and interesting effects.

Under the Sea – Journey to the Little Mermaid sits in the spot that once played host to the 20,000 Leagues Under the Sea ride. In order to commemorate this beloved attraction, Disney Imagineers did a couple of different things. To begin with, they bottled some of the water from the submarine ride and poured it into the water surrounding the Little Mermaid ride on opening day. They also included an imprint of the Nautilus submarine in the rock formations in the queue.

The Disney World version of this ride isn’t the only one out there. It has a sister in Disney’s California Adventure Park that is nearly identical and actually opened first. This is great, because it means west coast residents have a chance to enjoy this attraction right along with the folks in Florida.

The line for Under the Sea – Journey of the Little Mermaid usually moves pretty quickly. While this is usually appreciated by guests, it is a bit of a shame because it means visitors miss out on the awesome interactive parts of the queue. In fact, many people don’t even realize this particular queue has any interactive elements at all. Next time you hop in line for this one, slow down and let people walk past you so you can enjoy a bit of fun. Look for the animated crabs hiding in jars and other glass treasures. They will play with you and can “see” you and react to what you do.

This ride has a ton of characters. In fact, if you were able to somehow count each and every mermaid, fish, and eel in the entire attraction, you’d come up with the number 183. Of those, 128 of those are found dancing in the “Under the Sea” scene. That is an enormous amount of work for one scene, and boy, does it show!

Another one of those 183 characters is the creepy sea witch, Ursula. This is by far the most impressive animatronic in the entire ride and maybe even one of the most impressive in the park. She’s enormous, sitting at about 7.5 feet high and 12 feet wide, and the skin technology we mentioned before really makes it seem as though you are sitting inches away from this terrible villain!