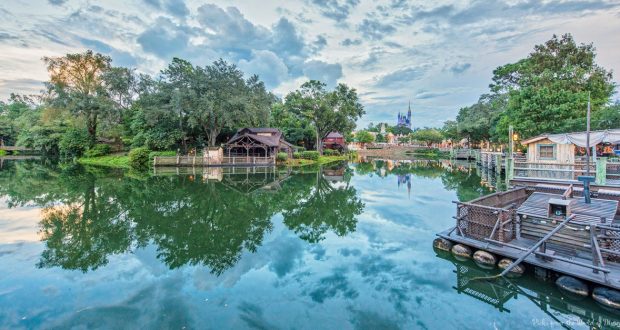 Tom Sawyer Island is one of the only places in Disney World that you can escape the theme park hustle and bustle and enjoy some more relaxed fun. There are caves and trails to explore, and plenty of fun to be found at Fort Langhorn. This makes for hours of entertainment for people of all ages. Still, not many people know the amazing secrets this classic Disney attraction holds. Here are 8 of our favorites.

Tom Sawyer Island in Disneyland is the only attraction that was designed entirely by Walt Disney himself. He decided to create his own design when none of the maps presented to him were quite right. Walt took to the drawing board one evening and returned the next day with the design we see today. Because it worked so well, a very similar design was carried over into the Magic Kingdom version of the attraction.

A lot of planning and work went into the creation of Tom Sawyer Island. Therefore, Disneyland’s version of the attraction didn’t officially open until 1957, a year after the opening of the park. Meanwhile, despite the fact that the island was placed in Magic Kingdom’s Rivers of America from the beginning, the Florida version of Tom Sawyer Island opened a full two years after Walt Disney World opened.

We’ve been told that not too long ago, cast members would hide 6 paintbrushes throughout the island each morning. Anyone who found one would be rewarded with a prize such as a FastPass for a popular attraction, making the search for one well worthwhile. Unfortunately, this is no longer the case, but we think it would’ve been a blast to take part in such a hunt.

The Settler’s Cabin found on the island was once perpetually burning. This was a super cool effect and one guests could stare at for quite some time. No one knows for sure why the flames were put out, but we do know that they stopped in 2005 and haven’t been seen since. The most likely theory is that pipe corrosion was discovered, making the burning effect unsafe.

Fort Langhorn on Tom Sawyer Island used to be Fort Sam Clemens. The name was changed when the Tom Sawyer movie was released. The movie featured a Fort called Langhorn, and the park decided to make their attraction match the new release. However, both names are a tribute to Mark Twain. Sam Clemens was the author’s legal name, and Langhorne (with an ‘e’) was his middle name.

6. The Rafts Have Names

In order to make the Tom Sawyer Island experience as realistic as possible, Disney has set up rafts to take visitors to and from the island. As an added touch, they’ve given each of these rafts a name. Injun Joe, Tom Sawyer, and Becky Thatcher are the ones we’ve heard of. Be sure to ask a cast member the name of your raft next time you visit.

Harper’s Mill on the island fits right in with the Tom Sawyer theming. However, it also sneaks in a nod to one of the earliest Disney movies. The 1937 film, The Old Mill, featured a very similar mill, and if you look around you will find a depiction of a scene from this old video. The depiction includes an owl and a bluebird, so keep an eye out for these fine feathered friends after watching the film yourself.

When the island first opened, guests were given paper maps to find their way around the island. This practice was discontinued, but there are now permanent maps posted around the island to help visitors out. That said, it is possible to purchase a vintage map of the island through eBay and other similar sites. These seem to be selling for around $30 each and would be a really neat collector’s item if you ask us.

As you can see, there is a ton of amazing history behind Tom Sawyer Island. Of course, there are also some really fun hidden secrets on the island. Be sure to visit next time you’re in Disney World in order to discover some of these secrets for yourself!