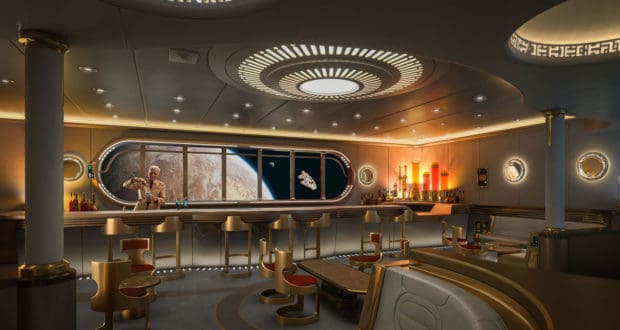 This week we learned a lot about Disney’s newest ship in the fleet the Disney Wish. One of the big releases was regarding a Star Wars themed lounge. StarWars.com talked to Imagineer Danny Handke regarding the details of this lounge and how it will take guests throughout the galaxy.

In the interview Handke discussed his passion for the Star Wars universe as well as his desire to bring the Star Wars movies to all generations on board the new ship.

So where is this lounge staged? Although they thought about how successful Oga’s has been in Star Wars: Galaxy’s Edge, they decided to go with a “Dryden Vos yacht ship?’ We landed on that, doing something sophisticated, which also matches the design of the Disney Wish.”

And as the name implies, hyperspace travel plays a big role in the storytelling and experience. Guests will be jumping to different locations and be able to tour of space, and sampling amazing drinks from those different planets. The illusion will be created via the bar viewport, a widescreen, seven-pane window to the stars.

Handke reveals some of the galactic destinations that fans can look forward to include “Tatooine (set during The Mandalorian), Batuu (“almost a day in the life of Star Wars: Galaxy’s Edge,” featuring the Star Destroyer from Star Wars: Rise of the Resistance and Hondo Ohnaka’s ship), and Mustafar (Rogue One: A Star Wars Story era). And finally a very exciting visit to the home of the Ewoks, Endor.”

We can’t know about all the drinks yet, but Handke states that beverages are being created from scratch, from beer to blue milk — meaning each will be different from anything found at Star Wars: Galaxy’s Edge.

We can’t wait to see all the details that will be revealed between now and the first sailing of Disney’s Wish.