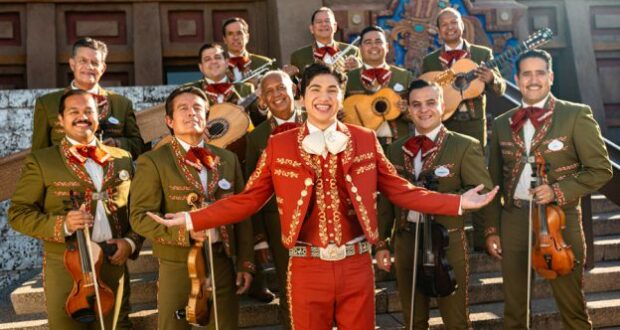 Anthony González, who is the voice of Miguel from Coco, surprised Guests at EPCOT for the 50th Anniversary of Walt Disney World. Cayla Ward shared more with Disney Parks Blog:

Turns out Anthony González has a lot in common with Miguel, the character to whom he lends his voice in Disney and Pixar’s “Coco”! Anthony has grown up quite a bit since the film’s release in 2017, but his love for singing has not changed; and if Miguel taught Anthony anything, it’s to seize his moment! During his family’s visit to Walt Disney World Resort last week, guests were delighted with a surprise performance by Anthony and Mariachi Cobre at EPCOT with beloved songs from the film such as “Un Poco Loco,” “Remember Me,” and “The World es Mi Familia.”

While he was here, Anthony took full advantage of all of the special offerings available during The World’s Most Magical Celebration and enjoyed seeing “Coco” featured across the resort in the new nighttime spectaculars “Harmonious” at EPCOT and “Disney Enchantment” at Magic Kingdom Park. He also got to see up close the new Miguel sculpture he announced this summer as part of the Disney Fab 50 Character Collection– part of the Walt Disney World Resort 50th anniversary celebration.

Just like his character Miguel, Anthony recognizes the importance of family. His visit gave him the chance to enjoy Hispanic Heritage Latinx Month and togetherness with his family through Walt Disney World Resort’s celebration of “Together We Are Magia.” Guests can enjoy special food and beverage, entertainment, and merchandise to celebrate Hispanic Latinx culture through October 15.

Enjoy this special message from Anthony commemorating his recent visit to Walt Disney World and performance with Mariachi Cobre here!

Disney and Pixar’s “Coco” is available to stream on Disney+, and you can enjoy listening to all the songs from the film on the “Coco Original Motion Picture Soundtrack” available on all streaming services.