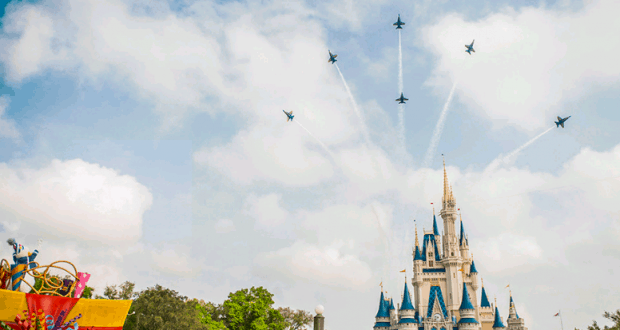 We have heard from various sources that the U.S. Navy Blue Angels will be flying over the Magic Kingdom at Walt Disney World on April 6th, 2017.  The Blue Angels consist of 6 F/A-18 Hornet air crafts that are notoriously seen taking to the skies.  They are currently scheduled to make two passes over Magic Kingdom between 9:30AM and 10AM EST.

The Blue Angels will be appearing at the Fun ‘n Sun International Fly-In & Expo in Lakeland, Florida on April 8th through 9th, so they are making a special visit to delight guests at Magic Kingdom.  This isn’t the first time that they have flown over Magic Kingdom, as they also made an appearance back in 2015 when they flew over the park.  Typically all of the parks at Walt Disney World is a no fly zone, so it is not normal to see air traffic over any of Disney’s theme parks.

It will be an amazing sight to see and a great day to be in the park. How many of you out there plan to be there on April 6th to see the Blue Angels live?