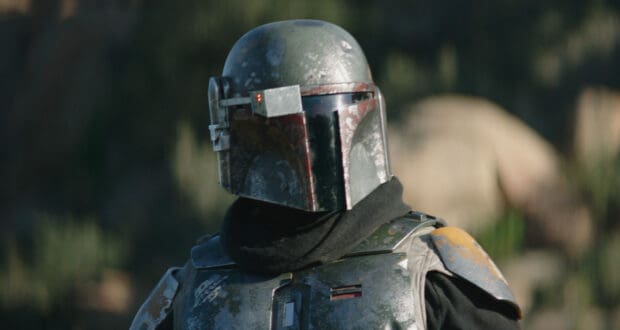 Boba Fett is one of the most popular characters in the ‘Star Wars’ franchise, but how much do you know about the bounty hunter? Kelly Knox has shared a refresher course with StarWars.com:

He’s a simple man making his way through the galaxy, like his father before him. He’s also a fearsome bounty hunter, indomitable survivor, and a man of few words. We could only be talking about Boba Fett.

Boba Fett instantly captured fans’ attention as he loomed in the background of Star Wars: The Empire Strikes Back, and he’s held it ever since. Let’s revisit the bounty hunter’s history as he takes center stage for the first time in The Book of Boba Fett.

Boba Fett’s real-life journey from concept to screen is a tale worthy of the famed bounty hunter. The character first came to life as a “super trooper” concept for The Empire Strikes Back, a masked figure in all-white armor designed by Joe Johnston and Ralph McQuarrie. The super trooper was eventually scrapped, but George Lucas had another character idea up his sleeve: a bounty hunter. The white armor was painted and chipped, a poncho was slung over his shoulder, and Boba Fett was born.

Now Boba Fett, the armor continues to evolve in this Joe Johnston sketch.

After the design was tweaked and tested, Boba Fett made his first appearance — and it wasn’t on a screen. Fans got their first glimpse of the now-legendary bounty hunter in the 1978 San Anselmo Country Fair parade. He graced televisions as an animated character in The Star Wars Holiday Special later that same year. His big screen debut finally came with the release of The Empire Strikes Back in 1980, and Boba Fett has been on the hunt ever since.

Growing Up Too Quickly

Jango Fett was hired by Count Dooku to serve as the genetic template for the clone army. Jango, a skilled warrior and Mandalorian foundling, was a bounty hunter by trade. He was respected and considered honorable among his associates. Jango had a special request to seal the deal with Dooku: an unaltered clone to raise as a son. He named him Boba.

Boba Fett grew up on Kamino alongside the clone army. Some time after his father’s death at the hand of Mace Windu, Boba hid among the young cadets’ ranks in an unsuccessful attempt to exact revenge on the Jedi Master. Working with Aurra Sing and Bossk, he tried again, and took Republic officers captive to force Windu to come to them. The plan didn’t sit right with the conflicted boy, however, and he eventually revealed the hostages’ location to the Jedi.

Boba spent time in a Republic prison. After escaping, he took mercenary jobs, including an ill-fated gig with Bossk, Dengar, and Asajj Ventress as she began her own bounty hunting career.

Making His Way Through the Galaxy

Jango Fett was considered among the best bounty hunters in the final days of the Republic. Before his death, Jango had taught Boba how to fight and how to pilot; later Aurra Sing mentored him and added to his arsenal of skills. Boba donned his father’s Mandalorian armor and began making a name for himself. By the time he started working for Jabba the Hutt, he had years of experience under his jetpack.

Shortly after the Battle of Yavin, Darth Vader hired Boba Fett to find out the identity of the pilot behind the Death Star’s destruction. Boba’s investigation ultimately revealed a single name: Skywalker. He shared the information with the Dark Lord of the Sith, and Vader’s obsession with finding Luke Skywalker began.

Darth Vader hired Boba again, this time to track down the Millennium Falcon. Wise to Han Solo’s schemes, Boba secretly followed the freighter to Bespin and alerted the Empire. Once he was granted the go-ahead to give Han Solo to Jabba the Hutt, Boba loaded the carbonite-frozen smuggler onto his ship and set off to make the delivery.

Of course, nothing in the galaxy far, far away is ever simple.

The hunter became the hunted when Han Solo was stolen from Boba Fett on Nar Shaddaa. Crimson Dawn had snatched Jabba’s prize and the crime lord put a price on Boba’s head in retaliation. Boba, determined to finish the job and honor his code, ended up fighting just about everyone in the galaxy to reclaim his prize.

With the bounty finally delivered and Han Solo stowed away at Jabba’s palace, Boba Fett was back in the gangster’s good graces. He accompanied the Hutt to the Pit of Carkoon, where Han Solo and Luke Skywalker were to be executed. A wayward strike sent Boba Fett into the mouth of the hungry Sarlacc inside the pit. The infamous bounty hunter was presumed dead.

But fate sometimes steps in to rescue the wretched.

How or when Boba Fett escaped the Sarlacc’s clutches is unclear. Years after the Rebellion claimed victory over the Empire, Boba Fett’s armor resurfaced in the settlement of Mos Pelgo. Rumors of the legendary gear on Tatooine caught not just the Mandalorian Din Djarin’s attention, but Boba’s as well. The Mandalorian departed from Tatooine with Boba’s armor in hand. Boba wanted it back, and he caught up to the Mandalorian on the planet of Tython to retrieve it.

Boba wasn’t planning to simply take the armor by force; he offered the Mandalorian a chance to strike a deal first. “Let’s all put down our weapons and have a chat,” Boba told the Mandalorian when they met face to face. “There’s no need for bloodshed.”

With his new partner, sharpshooter Fennec Shand, at his side, Boba honored his agreement with the Mandalorian. Then they moved on to his next target: the underworld. Boba Fett claimed Jabba’s throne on Tatooine and took control of the Hutt’s former territory. His true objective? That remains to be seen…

Keep up with all the latest Disney and Disney+ information on Disney Tips and like our Facebook page.