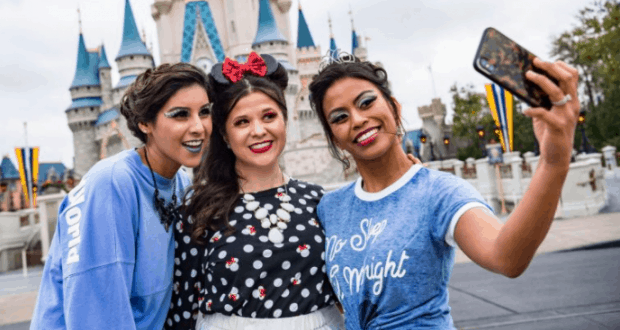 Some guests may not be aware of this, but Walt Disney World actually offers a variety of different salon and spa services.  There are locations at various Walt Disney World resorts where guests can pamper themselves or get a new look.  We have learned from Disney Parks Blog that a new set of packages are being offered at the salons known as the Character Couture Packages.  With these packages, guests are able to transform their hair, makeup and nails into designs that are inspired by some of the favorite Walt Disney World characters.

Here is a video from Disney Parks Blog after the trio received transformations into Minnie Mouse, Cinderella and Ursula:

Here is another shot of their look at they enjoy the Magic Kingdom:

There are many other characters that guests would be able to choose from.  The character styles that are available in include Disney princesses, the fab five characters, “galactic” styles and “hero/heroine” styles.  You could take advantage of this for one of the events at Walt Disney World like Mickey’s Very Merry Christmas Party or even just any regular day in the park!  Guests that are interested in booking the service should call 407-939-7727.

Who out there would love to do this when visiting Walt Disney World?  Which character would you want to transform into?