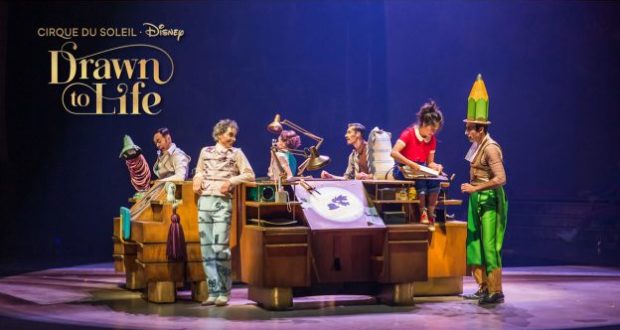 The show is a go, Cirque du Soleil fans! That’s right, while we previously shared a possible opening date for “Drawn to Life”, Disney has confirmed the date and announced the ticket on-sale date! Cirque du Soleil’s “La Nouba” show at Disney Springs closed on December 31, 2017, leaving the massive tent on the West Side of Disney Springs without a show since. Cirque du Soleil & Disney announced they would be joining forces to create a new show named “Drawn to Life.” While the show has been highly anticipated, due to COVID closures we’ve seen opening dates bounce around. Now, we’re officially locked in it seems and Disney has announced: “the show is a go!”

As shared by Disney: “Drawn to Life is a thrilling collaboration between Cirque du Soleil, Walt Disney Animation Studios, and Walt Disney Imagineering. At its core, the show is about the love between a father and a daughter with a story drawing inspiration from Disney’s 100-year heritage of animation. The family-friendly show brings timeless Disney stories and characters to life in an unforgettable way through the use of innovative design, acrobatic performances, dazzling choreography, musical scores, brand-new animation lovingly created by Disney Animation artists, and some extra touches of Disney magic.”

Drawn to Life was in its final rehearsals when the pandemic brought live theater performances to a halt. While waiting to return to the stage, artists stayed in shape by training at home or at local facilities. For a while there we weren’t sure if Cirque du Soleil would even return as the company filed for bankruptcy protection due to the pandemic. Now, the intermission is over, and being back in the theater together is a dream come true for the cast and crew!

Drawn to Life presented by Cirque du Soleil & Disney is scheduled to open on November 18, 2021. Tickets will go on sale on August 20 to the general public. For more information about Drawn to Life, visit DisneySprings.com/Cirque. We can’t wait to see the show!