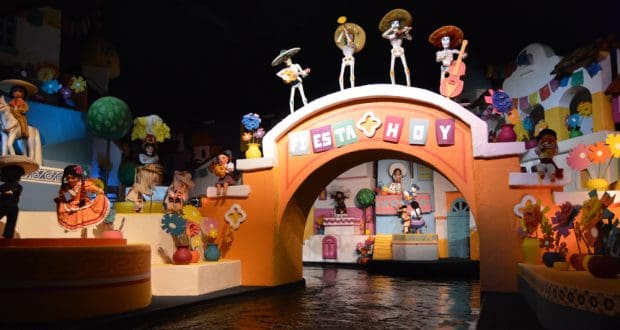 Could a Coco Attraction be Coming to Walt Disney World?

There is a new rumor circulating on the Chip and Co. website, so we wanted to share what we read.  The newest Walt Disney World rumor is that a Coco attraction could be in the works. Not only would this new attraction be in the works, but it is rumored to be taking over Grand Fiesta Tour Starring The Three Cabelleros attraction at Epcot’s Mexico pavilion on the World Showcase at Walt Disney World.  There are zero details announced about this, so that leaves room for speculation as to whether the attraction would completely change or just be an overlay on the existing attraction.  (We would think an overlay, but will have to wait to learn more.)

The Grand Fiesta Tour attraction is a dark ride inside the Maya temple at the pavilion.  The attraction also runs through the restaurant inside, San Angel Inn.  It is a slow-moving boat ride that goes through different scenes that highlight the culture and beauty of Mexico.

Coco is a new Disney Pixar movie that is scheduled to release in theaters later this year on November 22nd.  The Mexico pavilion seems like it could the perfect place to incorporate this movie into Walt Disney World.  Currently  Grand Fiesta Tour typically doesn’t have much of a wait, so it could also be a way to breathe new life into the attraction and bring more traffic out to the World Showcase.  As a reminder, this is all just rumor and speculation at this point, but it is fun to think of what might be.

What you all think of Coco making an appearance at the Mexico pavilion in Epcot?