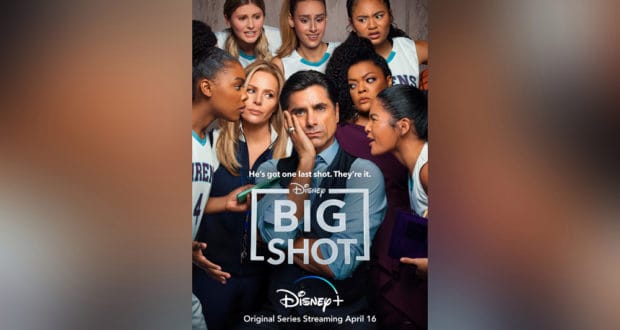 Another Friday brings us another Disney+ original series premiere.  This week we are introduced to Coach Marvyn Korn and his players at Westbrook Academy in “Big Shot.”  Similar to our other reviews, this will cover the first episode and will contain spoilers, so, please read on if you’ve already checked out this show, or if you don’t mind the first episode being spoiled!

We learn in the opening minutes of the show, Marvyn Korn, played by John Stamos, is a former men’s basketball coach at the University of Wisconsin who is fired after having a meltdown on the court after a bad call by a referee.  In a move reminiscent of Coach Bobby Knight, Coach Korn throws a chair onto the court and hits the referee.  In attempting to rehabilitate his image, his agent suggests that he take a coaching job at an all-girls prep school in California.

Coach Korn is quickly introduced to the rigors of coaching a high school team, as well as coaching women.  In his first meeting with the team, he tells one of his players that she needs to lose some weight.  Coach Korn frames this as a need to increase her conditioning since game tape shows that she fatigues late in the games, while the player accuses Coach Korn of fat-shaming her.  Later in the episode, Coach Korn is having a drink with his assistant coach and he has already identified how coaching is different.  We applaud the show for both the humor it pokes as a fish out of water aspect of Coach Korn, but also taking those moments to have him grow as a person.

Coach Korn also uses his first practice to bench the star player, Louise Gruzinsky, but we also learn that Louise is the daughter of the benefactor at the school who is responsible for Coach Korn getting his job at the school.  Viewers can quickly see the connection that Coach Korn and Louise will have this season.  Coach Korn shares with his team during their game that his biggest motivation as a player was his father calling him an embarrassment.  Earlier in the episode, a conversation between Louise and Coach Korn take a similar tone as Louise shares that she is under intense pressure from her father to be a star Division I basketball player.

In an added piece of drama, Coach Korn has a daughter, Emma.  In the scenes we’ve seen this week, she is still living on the East Coast, but also appears to be of high school age.  Do we think that Emma will be coming to Westbrook before the end of the season?  Maybe a new player for the team?

The episode ends with the Sirens losing their first game with Coach Korn at the helm by only three points after clawing back into the game in the second half.  The team is disappointed with their performance, but Coach Korn is pleased with the effort the team has shown and is positive about their outlook for the rest of the season.

The show was created by uber-producer David E. Kelley.  His television bona fides are high, so we are expecting a show that is smart, witty, and ultimately one that reaches to us on a deeper level.  We hope to see more of the feisty principal, Sherilyn Thomas, played by the amazing Yvette Nicole Brown.  She plays both a thorn in Coach Korn’s side, as well as a passionate advocate.  It will be interesting to see how their dynamic continues to play out over the season.  We are only getting to know the rest of the team in this episode, but the entire roster shows promise and we can’t wait to get back on the court next week!

What did you think?  Was the show a slam dunk or an air ball?  Let us know your thoughts on the first episode and whether you’ll be tuning in next week!