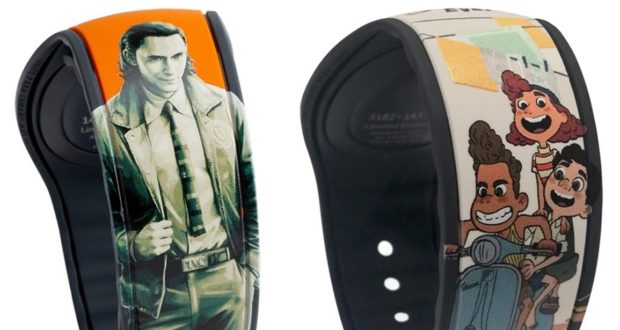 June is going to be a GREAT month for Disney+ viewers! The exciting new “Loki” Series is scheduled to release on Disney+ on June 9. Plus, we’ll have a chance to see an all new Disney/Pixar film, “Luca”, scheduled to debut June 17. While we simply can’t wait to watch both of these, Disney has already begun releasing limited-time merchandise… including Loki and Luca MagicBands! Check out the details below.

First up, the Loki MagicBand 2 – Limited Edition is available via shopDisney for $39.99. “Keep track of your day at Walt Disney World Resort with the help of the Time Variance Authority while wearing this limited edition MagicBand 2 design inspired by Marvel Studios’ Loki. With a simple touch enter parks, charge purchases to your room, and more.”

Then of course, there’s the highly anticipate new Disney Pixar film, Luca. Check out the Luca MagicBand 2 – Limited Edition available via shopDisney for $39.99. “Have the ”best Summer ever” at Walt Disney World Resort wearing this Limited Edition MagicBand 2 inspired by Disney and Pixar’s Luca. With a simple touch, enter parks, charge purchases to your room, and more!”

Will you be adding these two newbie MagicBands to your collection? Don’t wait, as limited release items such as these tend to go quickly. In the meantime, we’re counting down the days until we can watch the new Loki series, and pop some popcorn for the new Luca film!