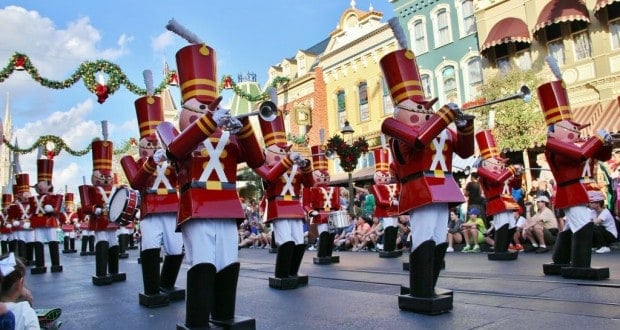 The much anticipated Disney Parks Christmas Day parade and performances will be airing very soon.  December 25th is just around the corner.  The show will kick off on ABC from 10AM-12PM EST and 9AM – 11AM CST, MST and PST.  This is the 33rd year for this annual event.  Julianne and Derek Hough will be hosting the entire event at is airs from various Walt Disney World parks and attractions.  There will also be musical performances by Alessia Cara, Mariah Carey, Sofia Carson, Kelly Clarkson, Gavin DeGraw, Jordan Fisher, One Republic, Trisha Yearwood and Garth Brooks.  You will get to see a lot of amazing characters, parade floats, performances, sneak peeks and more.

Many guests aren’t aware that the parade isn’t actually filmed and broadcast live.  It is actually filmed in advance, usually toward the end of November or early December.  The film is then edited together to make a cohesive show and experience.  The filming takes place over multiple days and the performances are repeated a few times to ensure that the cameras caught the desired footage and scenes to use to create the version that is broadcast on ABC.  Be sure to tune in and get your dose of Christmastime at Disney.