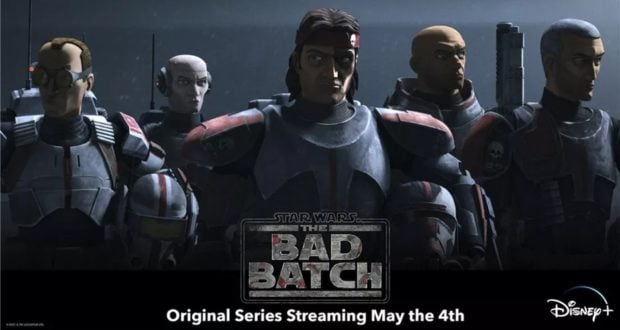 Disney+ had a well-timed present for Star Wars fans looking to celebrate May the Fourth this morning with the premiere (75 minute!) episode of the Bad Batch.  This deviates slightly from Disney’s traditional release schedule for original content on Friday mornings, but I’m confident no Star Wars fans are complaining about that this morning.  Additionally, for those readers who like the consistency of a Friday morning premiere for content to start the weekend off right, viewers will get another episode of the Bad Batch on Friday!

The Bad Batch immediately immerses viewers in action and in a specific moment in time that we’ve seen before.  In the waning moments of the Clone Wars and the birth of the Galactic Empire, we are introduced to a Jedi Knight and her apprentice, Caleb.  Losing a battle, Caleb had requested the help of Clone Force 99, unofficially known as the Bad Batch.

These clones are defective clones that failed to meet the requirements of Storm Troopers, but their defects prove them valuable in other ways as they have excess in specific traits.   The squad is comprised of five members: Hunter, the de facto leader; Wrecker, the muscle of the gang; Tech, the timid, but resourceful brains of the operation; Crosshair, the silent professional; and, Echo, a reliable team member.

In the span of the first episode, the members of the Bad Batch struggle with balancing their supposed allegiance to the Galactic Empire alongside their own beliefs on what is right in a given situation.  Immediately, Hunter is faced with the prospect of executing Order 66 and eliminating the Jedi Order.  When he fails to act, this causes conflict with one of the more rule-following in his command, Crosshair.

Even the higher-ups in the Galactic Empire appear not to know what to make of the Bad Batch — Admiral Tarkin makes an immediate appearance on Kamino to discuss the Galactic Empire’s continued need for more clones now that the Clone Wars are over.  During his time on Kamino, Admiral Tarkin attempts to “test” the squad in hopes of discovering their allegiance and skills and possible to eliminate them as a threat.

While on Kamino, the squad encounter a young medical assistant, Omega.  Omega quickly embroils herself in the battles going on the ship leading to the final battle where we see lines drawn as Omega protects Hunter, Wrecker, Tech, and Echo as they evacuate the planet, but Crosshair remains behind due to his commitment to the Galactic Empire.

Viewers will love this first episode where we learn not only about the Bad Batch, but can see the deeper fault lines that will propel the story through the remainder of the season — are they going to be a consistent foil to the Galactic Empire or more of an apathetic bystander by not necessarily opposing them, but not acting against them?  How will their various defects manifest as strengths to help them in tough situations?

We heard mention of General Obi-Wan Kenobi, but will we see any of our favorites from other parts of the Star Wars universe?  With so many questions left to be answered, we are so thankful that we only have wait three more days for our next episode!

Have you watched the episode yet?  Is “The Bad Batch” going to be required viewing for your family every Friday?