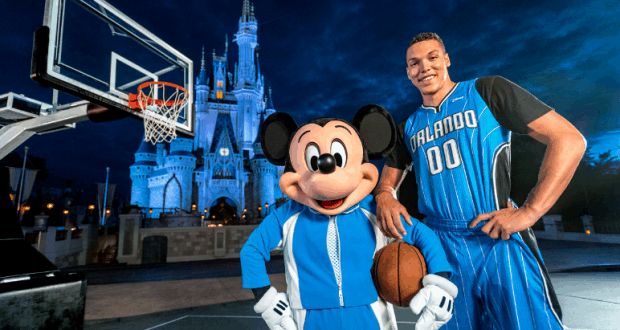 The NBA has announced that they will go through a 3-year trial where companies will be able to sponsor uniforms for the different NBA teams.  Disney has now announced that Walt Disney World will be the sponsor for the Orlando NBA team, the Orlando Magic.  The Disney logo will be proudly displayed on the jerseys of each of the players, located on the front left shoulder of the uniform.  Not only will the Disney name be present with the Magic team, but there will also be perks and other benefits available for Walt Disney World Annual Passholders.

Disney Annual Passholders will have the opportunity to get special seating at games at the Amway Center.  You will even be able to renew your passes or purchase new passes from Amway Center, too, while you are already there.

You can check out this promo video with Mickey Mouse and Aaron Gordon from the Orlando Magic playing basketball:

What do you think of this new announcement? Who will be attending an upcoming Magic game?