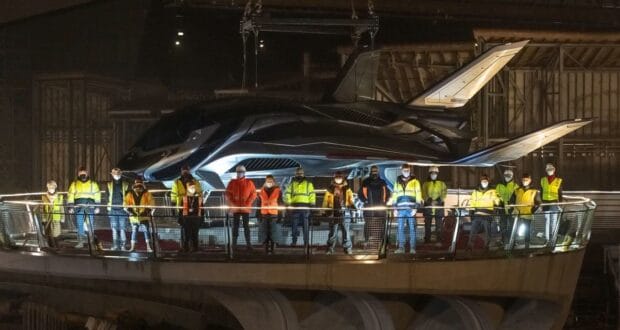 If you have been to California Adventure at Disneyland in Anaheim recently, you have probably been to Avengers Campus. It is an extremely unique and incredible land and a Marvel fans dream come true.

WEB SLINGERS: A Spider-Man Adventure is a one of a kind ride that is extremely popular. If you have not done this attraction, what are you waiting for? The technology is incredible!

Recently, Disneyland Paris has announced lots of updates for its 30th Anniversary. One of those is Avengers Campus coming next summer. Scot Drake shared more exciting updates with Disney Parks Blog.

Earlier in the week we shared our excitement that the iconic Nova Corps Starblaster has begun installation in front of the Wonders of Xandar pavilion for Guardians of the Galaxy: Cosmic Rewind, making our interconnected story universe even bigger! Our Walt Disney Imagineering and Marvel teams have already successfully brought to life The Avengers Campus in California as well as the Stark Expo at Hong Kong Disneyland and we are thrilled to be the next step in Tony Stark’s vision for training more heroes for the future! It’s been just a few hours since the Quinjet has safely landed, and we couldn’t be more excited for what’s to come with the opening of Avengers Campus this summer!

Just like in Hong Kong and California, Disneyland Paris guests will be able to meet and interact with Super Heroes in newly immersive ways, as the Avengers and their allies recruit new heroes to join them. And with the Quinjet now sitting atop the Campus’ central hub, this new heroic location is closer than ever to becoming real.

As Creative Executive for Walt Disney Imagineering’s Global Marvel Portfolio, I wanted to share an exclusive glimpse of this landmark development – so check out the video we captured during this epic landing:

I also wanted to take the opportunity to celebrate the great diversity of talents that allowed this unique aircraft to spread its wings and fly above Avengers Campus in Disney California Adventures and at Disneyland Paris: our Imagineers, Marvel Studios and Entertainment partners,  as well as the European team at UK Loco that has been instrumental in bringing our creative vision to life.

When we started imagining Avengers Campus, we immediately thought of creating a powerful centerpiece that would draw Guests into the heart of the action, thus encouraging them to bring out their inner superhero. We also looked for a symbol of the global interconnection between the campuses, and the idea of the Quinjet quickly emerged as the most iconic piece of Avengers equipment that would rally superheroes around the world.

First imagined as an advanced aircraft transport used by Earth’s Mightiest Heroes, there have been several different Quinjet designs throughout Marvel comics and the Marvel Cinematic Universe. However, for our own Avengers Campus version, we wanted to show an aspirational forward-looking aesthetic. So we came up with this all new WDI design. But to build a full-size jet, we needed to bring in additional engineering expertise which we did by partnering with British company UK Loco, a long-term, trusted partner of WDI Paris who had already provided unrivaled technical input into immersive experiences such as Toy Story Playland, Crush’s Coaster and Ratatouille: L’Aventure Totalement Toquée de Rémy.

When we came to meet UK Loco at their workshops in Evesham, England after many Zoom meetings and transatlantic exchanges on the Quinjet’s 3D model, we were immediately convinced by the team’s technical expertise, their eye for details and above all, the capacity to think out of the box and find innovative solutions. Qualities that have proved critical in order to deliver our creative vision, i.e. a Quinjet shining as a beacon of inspiration, in the midst of the pandemic. Seeing the Quinjet come to life from an idea in a brainstorm, to a sketch on the wall, then a virtual design model, and finally to the iconic centerpiece it is today, is an incredibly moving experience, and it inspires us all to continue delivering our best.

With this new Quinjet, we wanted to take the Avengers into a new era, where we are welcomed to step up and make the Earth a safer place alongside Earth’s Mightiest Heroes. I can’t wait until we welcome our first recruits to assemble at this beautiful new Avengers Campus later this year!

Related: Shows and Entertainment for 30 Years of Disneyland Paris

Related: Food and Beverage for 30 Years of Disneyland Paris