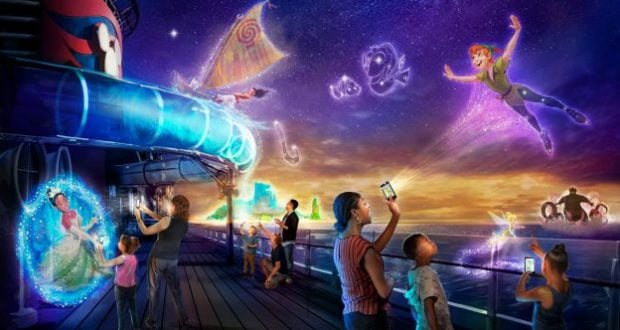 If you’ve ever sailed aboard the Disney Cruise Line, chances are you had an experience, unlike any other cruise you’ve experienced before. The Disney Cruise Line fleet including the Disney Dream, Disney Magic, Disney Fantasy, and Disney Wonder have kept cruisers satisfied for years. Now, Disney is introducing their newest ship in the fleet – the Disney Wish. We’ve been following along with all the exciting reveals about the Disney Wish as the maiden voyage departing from Port Canaveral inches closer in June 2022. Disney has revealed several details about the new ship including “Arendelle: A Frozen Dining Adventure”, expect a stunning stateroom and dream suite compared to Cinderella Castle Suite, a “never been done before in a restaurant” dining experience, unique dining experiences, and brand-new ways for adults to escape and indulge aboard the new ship. And that’s just the beginning! There is no doubt the Disney Wish will be a one-of-a-kind Disney cruise experience. Now, we’re learning a new “first-of-its-kind interactive experience” is joining the list of must-dos aboard the Disney Wish.

The Disney Cruise Line has announced “Disney Uncharted Adventure”, a first-of-its-kind interactive experience that will lead Guests aboard a Disney Wish cruise on a journey from bow to stern and beyond the stars with the help of Captain Minnie Mouse and Mickey Mouse. Check out the video below to learn more about the experience only the mind of a Walt Disney Imagineer could create!

As shared by Disney: The sixth video in our “Designing the Disney Wish” series explores the development of Disney Uncharted Adventure, a first-of-its-kind interactive experience debuting aboard the Disney Wish in summer 2022. Using innovative technology like augmented reality and physical effects, Disney Uncharted Adventure will take classic Disney storytelling into an all-new realm of immersive family fun as Guests embark on a multidimensional voyage into the worlds of Moana, Tiana, Peter Pan, Nemo and more.”

Let the Disney story begin with a Disney Wish reservation. Unlock Disney Uncharted Adventure on the Play Disney Parks app, which transforms your mobile device into an enchanted spyglass – a tool that allows you to set sail for adventure, solve puzzles, conquer quests and ultimately save the day. Once onboard, you will use your spyglass to reveal never-before-seen views of the stars above, where enchanted constellations take shape as recognizable icons from Disney and Pixar stories. You will choose where to go next, charting a course toward adventurous locations. Disney character highlights include:

The cruise ship adventure will culminate in a grand finale hosted in one of the ship’s premier entertainment venues. During this live interactive experience, you’ll gather with other players to battle an infamous Disney villain (who’s been pulling the strings all along) and finally restore the wishing star to its rightful place in the sky.