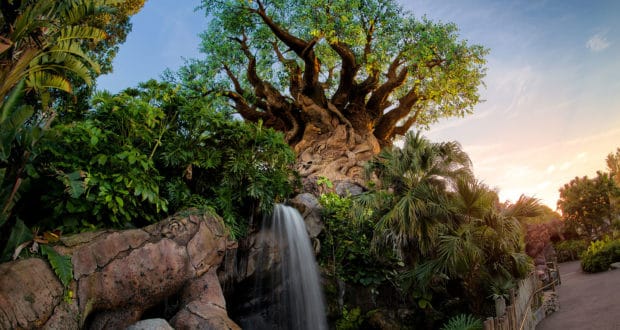 First Things We Do When Arriving at Disney’s Animal Kingdom

With more than 20 attractions, numerous restaurants, thirst-quenching bars and tempting snack carts, world-class shows, almost 30 shops, and of course the wonderful animals, there is so much to see, do, and experience in Disney’s Animal Kingdom.  Toss in new attractions and shows being added all the time, and it can definitely be daunting to tackle this park! Make sure you start off on the first foot, paw, hoof, or claw, and consider the most important things to do when you first arrive at the park. Here’s my tried and true plan for having a wild time and fantastic adventures!

Caffeine is a necessity to get ready for a busy day at Disney’s Animal Kingdom. The best place to get it at the Joffrey’s stand right after the security area, but before you enter the park. Most guests rush right past this convenient place in the excitement of entering the park, so the line is typically short. While you’re there, grab a delicious pastry too to keep you fueled for all of the morning’s activities. A second choice for your morning coffee is Creature Comforts inside the park on Discovery Island, featuring Starbucks beverages.

2. Protection from the Sun

No matter what time of the year you’re visiting the Animal Kingdom, the sun is strong, and there are sections of the park that aren’t very shaded, like Dinoland USA. It’s very important to stop and apply your sunblock before your adventures begin. Take a few minutes after you grab your coffee and do this important task, and then you’re ready to go for the next few hours.

Even though my family has visited the Animal Kingdom park more times than I can count, we always grab a map at the entrance, right after you go through the MagicBand scanners. While we know the layout of the attractions, the maps are helpful for updated show times, and it’s a fun keepsake to add to the scrapbook.

Having a general idea of attractions and shows what your traveling party wants to experience at the Animal Kingdom is a good idea, even if you’re not planning out every minute of the day. Make a tentative plan of the order in which you want to visit each area and where you want to have meals, if you don’t already have a reservation. This way you’re not crisscrossing the park several times in an effort to get to your group’s favorite attractions.

5. Relax in the Oasis

Take a more leisurely approach to your visit and wander around the meandering paths in the Oasis. The area is lush with beautiful foliage and flowers, and exotic animals are around every bend.  Check out the macaws, cockatoos, iguanas, swans, and babirusa pigs, just to name a few of the animals that make the Oasis their home. Cast members are typically present here and are always eager to answer questions and share their knowledge of the animal inhabitants.

Follow the shaded path from the park entrance around the Oasis area, and you are finally rewarded with a beautiful view of the infamous Tree of Life, the iconic 145-foot tall symbol of the Animal Kingdom. Luckily, there are Disney PhotoPass photographers waiting to capture the memory of your group with the Tree in the background. There are usually PhotoPass photographers positioned at various spots in the tree’s vicinity, and I recommend getting a picture taken before your adventures officially begin. Everyone is still fresh and full of energy, and you don’t have to worry about forgetting to get a shot of your entire group before you leave the park.

Make sure you game plan includes heading to the Kilimanjaro Safaris fairly early in the morning. The lines aren’t long and the animals are typically more active in the cooler morning temperatures, as opposed to the afternoon. Don’t forget about the Gorilla Falls Exploration Trail too, which is usually less crowded and more relaxing in the early morning.

If a bouncy safari ride isn’t your favorite way to wake up in the morning, veer to the left in the path from Discovery lsland and head to Pandora and the Valley of Mo’ara. The scenery may be from another world, but it’s beautiful to look at as you head to get a good spot in line for the thrills of Flight of Passage and the exotic Na’vi River Journey.

It’s very tempting to follow the flow of guests to the most popular rides in the park, like Expedition Everest and Avatar Flight of Passage, but you’ll also miss the charm of the Animal Kingdom that’s present in the details. From the pawprints embedded in the walkways around the Oasis, the posters in the Village of Harambe, and the colorful Tibetan prayer flags draped from trees in the Asia section,  to the rustling of otherworldly creatures in the vegetation of Pandora, there are fabulous details everywhere that make Disney’s Animal Kingdom such a wonderful experience.