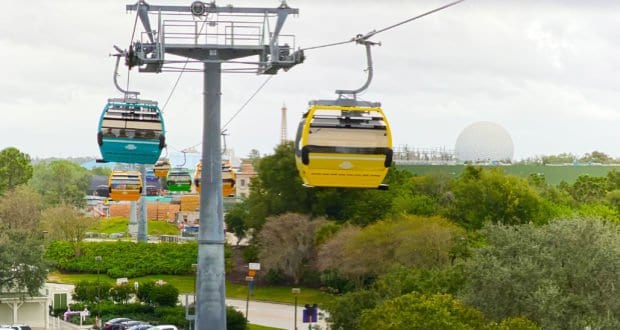 Away we go! Hop in for a million-dollar view of some of Walt Disney World’s famous icons, gorgeous resorts, picturesque waterways, and lush scenery. Walt Disney World guests can fly on Dumbo, glide while straddling a Banshee, sail above London on Peter Pan’s Flight, fly as a passenger on the Millennium Falcon, and glide while traveling the globe on a Soarin’ flight. Check out the newest way to soar as a passenger on the Walt Disney World Skyliner, an exciting gondola transportation system. Kick back, relax, and enjoy the newest way to travel around the “most magical place on Earth”!

Accepting its first passengers in September 2019 at a cost of $33 million, there’s room for everyone on the Skyliner. There are 300 gondola cars traveling around five stations, and each gondola can hold up to 10 guests, or six guests and a wheelchair or ECV. There are six total miles of cable connecting the entire Skyliner system.

The gondola cars are brightly wrapped in eight different colors, and most display a favorite Disney film or character. Will you get to ride in the Minnie Mouse, Donald Duck, Coco, Hitchhiking Ghosts, Moana, or Frozen gondola? The possibilities are endless, and it’s fun to look out for your favorite characters as the cars sail overhead.

Any Walt Disney World guest can ride the Skyliner, and there’s no separate ticket required. You can use the gondolas as a method of transportation to get to a park or resort, or you can just hop on for a relaxing ride around the Walt Disney World property.

Traveling at top speeds of 11 mph, the Skyliner relies on an air ventilation cooling system and constantly flowing breezes to keep passengers cool, rather than air conditioning. Gondolas slow down to one mph when approaching a terminal.

Keep a backup form of transportation in mind in case of inclement weather! The Skyliner closes down if there’s any sign of lightning.