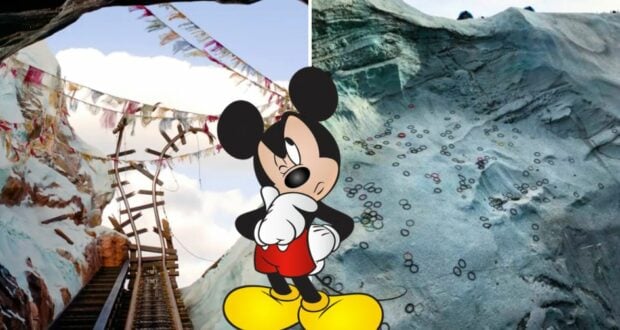 Why Are There Hair Scrunchies on Expedition Everest?

Have you ever reached the top of Disney’s Expedition Everest attraction, only to spot hundreds of hair scrunchies littered everywhere? What is that all about? Well, a former Disney Imagineer breaks it down for us Disney fans!

It’s a gorgeous day at Walt Disney World Resort. You’ve talked yourself into riding one of the most popular attractions at Disney’s Animal Kingdom… Expedition Everest – Legend of the Forbidden Mountain.

You’ve ridden through the first half of the massive roller coaster to find your journey comes to a halt as the Yeti has ripped apart the track at the top of the mountain.

Just before you plummet backward through the dark, Disney pauses the coaster for a moment. Look around! Not only is there a special effect bird that most riders miss, but there are also hundreds of hair scrunchies thrown on the mountain top.

While we’ve seen weird and immature behaviors such as a Guest spraying cheese all over Big Thunder Mountain Railroad, the Expedition Everest hair tie experience is actually part of a Disney fan ritual.

Former Disney Imagineer, Joe Rohde is well known among Disney fans as the brilliant mind being several Disney experiences including much of Disney’s Animal Kingdom Park and its feature attraction, Expedition Everest. Recently, Joe took to social media to break down this hair scrunchie “ritual behavior” with the following message and image on social media.

Joe Rohde notes, “More ritual behavior. The hair scrunchies! The hair tie thing at the top of Everest is Weird but also ritualistic. It violates the illusion of the scene, but it oddly parallels what people do at the top of a real Himalayan pass…which is to leave a rock.”

“Obviously someone started it, but what is significant is the huge numbers of people who follow along. What’s going on with that? It messes with the illusion of the fantasy place completely… However, it creates a very real interactive ceremony at the actual top of the highest point of the ride. I cannot condone this behavior partly because some poor person has to clean it up…but it does interest me.”

It’s super intriguing to compare the hair scrunchie ritual on Walt Disney World’s Everest to a true ritual of leaving a rock behind on the real Mount Everest.

Next time you reach the top of the mountain on Expedition Everest be sure to look around at all the hair scrunchies and think of it as a Disney fan ritual!