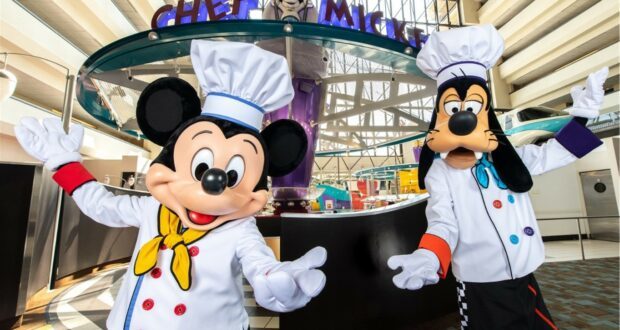 One of the most magical things about a visit to Walt Disney World is the ability to see your favorite Disney friends in person. Unfortunately, character meet-and-greets had to be put on hold for the time being, leaving many kids (and kids at heart) feeling a bit down in the dumps. If you’re one of the many people who are missing Disney characters like crazy and can’t wait to pull out your autograph book and hop in a meet-and-greet line for a hug, you might be feeling a little antsy. Fortunately, while the autograph book and hugs will have to wait, there are some ways to get your character fix during the ongoing phased reopening of the Disney parks. Planning a trip and want to know how to make sure you see some of your favorite friends? In this article we will discuss the ways you can catch glimpses of, wave to, and sometimes even chat with princesses, the Fab Five, and many more Disney characters right now.

The first option is to keep an eye out for parade floats, promenades, boats, and trolleys. All of these are like mini-parades that run at random times throughout the day. This ensures everyone who visits gets a chance to see characters passing by without allowing crowds to accumulate as they wait for a single big parade event. While each park does their mini-parades a bit differently, the idea is the same in each location, and as long as you spend a decent amount of time in the park during daylight hours, you’re bound to catch a peek at a friend or two. Still, it does help to know what you’re looking for.

In addition to the cavalcades listed above, many other unscheduled character appearances happen throughout the day in each of the parks. Because social distancing must be maintained, these appearances are almost always on balconies, stages, or other raised platforms, so be sure to keep an eye up high to make sure you see them when they do appear. What we love about these character appearances is the fact that the characters aren’t moving quickly past you and will often interact with you as you stand on the ground below. If you see a character, wave and shout hello. You might just get a reply!

If you don’t mind spending a little money in order to see characters, a character meal is another great option. This is the best way to guarantee you’ll see certain characters, so if you have your heart set on seeing a particular character, look into this option. While the characters at these meals will no longer walk to your table, they do walk through the restaurant and will often perform little dances and pose for quick photos from afar, and will always wave to guests as they pass through. Character meals that are currently available include: Tusker House, Hollywood and Vine, Garden Grill, Chef Mickey’s, Topolino’s Terrace, and Be Our Guest.

A lot of the shows that usually run at the Disney World parks aren’t running at the moment. That said, there are a few performances available that will allow you to see your favorite Disney friends. While this option will not allow you to interact with characters at all, it is the best way to see characters for an extended period of time. It’s also fun to be entertained by the characters rather than just watching them wave as they pass by. Live shows that are currently available are all found in Hollywood Studios and include: Festival of the Lion King, Disney Junior Play and Dance!, Lightning McQueen’s Racing Academy, and Frozen Sing-Along Celebration!

As you can see, there are still plenty of ways to connect with your Disney friends and get your character fix. By using these options, you’re sure to have a great time waving and greeting the princesses, Mickey, and all your other Disney favorites as we all eagerly await the day they can dole out hugs once again.