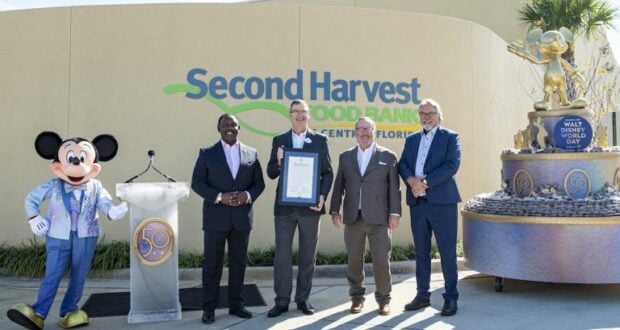 Today just might be the “best day ever” because Dec. 3, 2021, has been declared as “Walt Disney World Day” across Central Florida – the community we’ve proudly called home for more than 50 years.

We kicked off today’s celebration at Second Harvest Food Bank of Central Florida with Walt Disney World Resort leaders and an official proclamation from Orlando Mayor, Buddy Dyer and Orange County Mayor, Jerry Demings. Of course, the morning wouldn’t have been complete without Mickey Mouse & Minnie Mouse attending the event dressed in their EARidescent best.

Our Central Florida family and the many nonprofit organizations who support the community have played such an important role since Walt Disney World Resort first opened its gates in 1971, which is why we couldn’t imagine celebrating Walt Disney World Day anywhere else than at Second Harvest Food Bank – an organization driven to close the gap of unmet needs in Central Florida and a recent Disney grant recipient of $500,000 in honor of our 50th anniversary celebration.

Today, Disney VoluntEARS were proud to join in the celebration at Second Harvest Food Bank with some hands-on helping, sorting and packing food boxes for distribution to those who need it most.

While there are many individuals and organizations who made this day possible, and who have contributed to the success of Walt Disney World Resort over the past 50 years, we want to give a very special shout out to our cast members who keep Walt Disney’s dream and magic alive every day. Thank you for the inspiration and dedication you give to all who visit The Most Magical Place on Earth — this Day is for you because YOU are the magic.

Want to join in the celebration with us? Head to your social media channels and share your favorite Walt Disney World photos and memories with us using the new Walt Disney World Day GIPHY stickers. Just search “#WDWday” on Instagram, TikTok or Snapchat stickers and start creating!

Take a look at the official proclamations below: