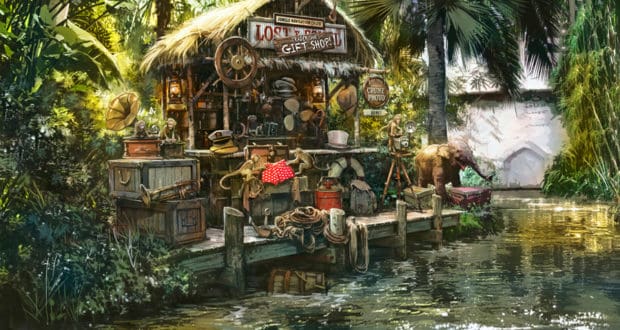 We previously shared the news that both Disneyland and Walt Disney World’s iconic Jungle Cruise attraction would be undergoing changes with new scenes and storytelling. Now, Disney has released the latest information regarding the former Trader Sam finale scene of the attraction which is now to be replaced with a gift shop scene.

As shared by Disney: “Word on the stream is that Alberta Falls, proprietor of the Jungle Navigation Company Ltd., has entrusted her longtime friend, Trader Sam, to manage the new Lost & Found location. But, with Trader Sam being Trader Sam, there’s always an opportunity to make some extra money. After all, all the best rides end with a gift shop, right? Take a look at this rendering of their newest venture together. Clearly, Sam is betting on an established reputation as the best merchant in the jungle! But, while he’s out lost and finding some new inventory, it’s the animals that get the last laugh!”

Disney has noted that the new scene is one of several that are “interconnected and build on the original story and humor of the Jungle Cruise”. The “head” salesman, Trader Sam, isn’t in the art rendering of the scene as far as we can tell. We’ll keep you posted as we learn more about the animatronic Trader Sam and if Disney plans to place him in another location.