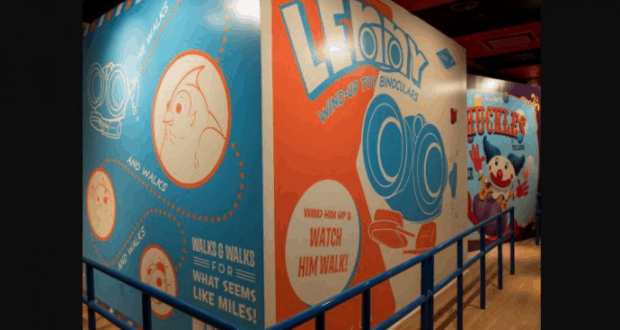 We are excited to learn from Disney Parks Blog that two new characters have been added to the queue for Toy Story Mania.  Toy Story Mania is located at Disney’s Hollywood Studios within Walt Disney World and is the existing attraction to be part of the new, immersive Toy Story Land set to open on June 30th, 2018.  The newly added characters to the queue include Lenny and Chuckles.  Lenny is Andy’s walking binoculars.  Chuckles is the clown who was introduced in Toy Story 3.  The have been added to the attraction in the form of the toy boxes that they might have come in.

The new entrance for the queue to Toy Story Mania will feature a carnival game box as part of the changes that were completed for Toy Story Land.  The attraction has also expanded to include a third track so that even more guests will be able to enjoy the attraction during a given day.  The attraction has continued to command long wait times since it first opened in 2008, so the third track will be much needed with the additional crowds expected for the debut of the new land.

As guests enter Toy Story Land, they will “shrink” to the size of a toy to join in the fun happening in Andy’s backyard.  Guests will also be able to enjoy two brand new attractions, Slinky Dog Dash (a roller coaster assembled by Andy from his Mega Coaster Play Kit) and Alien Swirling Saucers (a play set that Andy won from Pizza Planet).

Who else can’t wait for Toy Story Land to finally open in June?