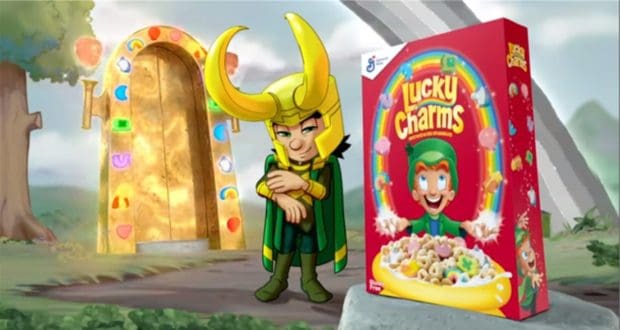 As the debut of the highly anticipated Disney+ “Loki” series launches tomorrow, June 9, Lucky Charms has announced a special limited-edition “Loki Charms” box that will be available while supplies last. Check out the details and video below!

As shared by Lucky Charms: “There’s been a disruption in our reality and the Lucky Charms we all know and love have shape-shifted into a new mischievously delicious form. (Thankfully, the cereal and marshmallows in the box were unaffected.) Don’t miss out on this limited-edition Loki Charms box at MischievouslyDelicious.com, 11am ET on June 9. You’ll need to act fast since supplies are super limited. Pour a bowl and munch along to Marvel Studios’ Loki on @Disney Plus, streaming June 9. #MischievouslyDelicious”

It looks like we’re not the only ones excited about the new Loki series as Lucky Charms celebrates the big debut with this special release! Don’t wait as we suspect “Loki Charms” will sell out fast.