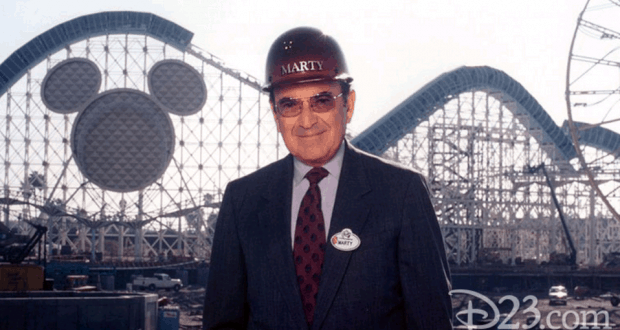 D23 has announced that a special lunch event with special guest, Marty Sklar, will be offered on Friday, May 12th at Walt Disney World.  The event will take place in the Whitehall Room at Disney’s Grand Floridian Resort & Spa Convention Center.  The tickets will be limited to D23 Gold Members and there will be a limited amount of tickets available for this amazing event.  Marty Sklar worked directly with Walt Disney on various attractions and experiences at Disneyland.  Then he went on to do the same kind of work with Walt Disney Imagineering for Walt Disney World.

Here is what D23 had to say about his experience working with Disney:

“Marty’s Disney journey began in June 1955, when he was recruited to create The Disneyland Timesnewspaper. He soon joined the Disneyland publicity and marketing staff, where he established the popular Vacationland magazine. In 1961, Marty joined WED Enterprises (now Walt Disney Imagineering) to help develop the four main Disney shows for the 1964-’65 New York World’s Fair, including Carousel of Progress, Great Moments with Mr. Lincoln, the Magic Skyway, and It’s a Small World. He eventually found himself writing personal material for Walt Disney, whether for publications, television shows, or special film appearances—including the historic “EPCOT Film,” in which he translated Walt’s bold vision for an Experimental Prototype Community of Tomorrow.

By 1974, Marty was an Imagineering officer, leading concepts and planning for the development of EPCOT Center (now Epcot) at Walt Disney World Resort. Later, as Walt Disney Imagineering vice chairman and principal creative executive, Marty led the creative teams through growth and innovation, including new Disney theme parks, resorts, and other experiences all over the world. Although Marty retired on July 17, 2009, he continues to share Walt’s legacy through special events, articles, and books. Inducted as a Disney Legend in 2001, he is the only Disney cast member to participate in the opening of all 12 Disney theme parks around the world.”

This is one event that any die hard Disney fan won’t want to miss.  There is even an exclusive gift that will be given to guests in attendance at the event.  D23 Gold and Gold Family members will be able to reserve 1 ticket for themselves and 1 for a guest.  All guests must be at least 18 years of age in order to attend.  D23 Gold membership cards must be presented when tickets are picked up to ensure that only members and their guests get the tickets.

Does anyone out there plan on attending this amazing event?