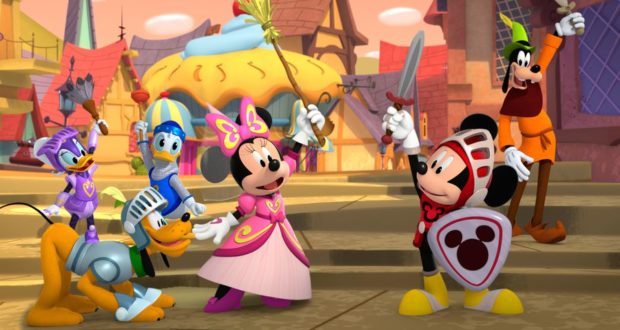 The new animated series “Mickey Mouse Funhouse” features our favorite stars of Mickey, Minnie, Donald, Daisy, Goofy and Pluto.  This show is an animated series for preschoolers and families filled with music, guided by a curriculum focused on physical, emotional, social and cognitive, thinking and creative skills as well as moral and ethical development.

“Mickey Mouse Funhouse” takes place in the magical Funhouse Forest, where Funny lives with his pet doghouse, Teddy, and Windy, the weathervane. Funny can change into anything – a rocket ship, a steamboat, an amusement park ride – and guides Mickey and his pals through all sorts of adventurous and comical quests. Inside the funhouse, the Stairs to Anywhere take the crew to the Adventure Doors, each one leading to a different world. Once transported to these new lands, Mickey and his friends are transformed into characters specific to each setting that help immerse them into whatever situation the doors have lead them. Whether portraying medieval knights, kings and queens in the kingdom of Majestica, old-timey cowboys and cowgirls in Sunny Gulch or mer-people in Underwater Ocean World, Mickey and his pals are eager to embark on these new adventures together.

The first episode will be on Disney Junior on Friday, August 20th with no Disney+ release date yet.