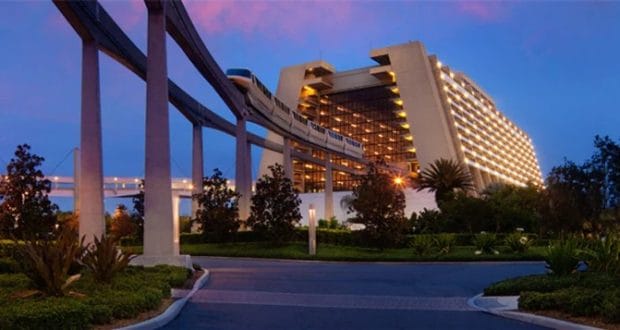 Hold onto your Monorail seats Disney fans! It’s been a full week of news and Disney isn’t done dishing it out! Earlier this week we learned about the new Disney Genie and the paid “Fastpass” program coming to Walt Disney World and Disneyland. We also shared an updated about Disney’s new mask policy. Now today, Disney has been serving up FOOD news! Boma Flavors of Africa has reopened at Disney’s Animal Kingdom Lodge – making it the FIRST buffet to reopen since the pandemic. Two more buffets are making a comeback including The Crystal Palace at Magic Kingdom Park and Biergarten Restaurant at EPCOT. We’re getting more breakfast options with Cinderella’s Royal Table returning their breakfast, as well as quick-service spot Kusafiri Coffee Shop and Bakery at Disney’s Animal Kingdom. PLUS, Dockside Diner quick-service at Disney’s Hollywood Studios is returning. And now, Disney has dropped the news that a new restaurant is coming to Disney Contemporary Resort!

Disney Parks took to Twitter to share: “We’re cooking up new experiences at Disney’s Contemporary Resort for “The World’s Most Magical Celebration!” Steakhouse 71 will be a casual dining concept that gets its name from the Resort’s opening year, plus, a new dining experience is coming to California Grill.”

We previously shared the news that The Wave… of American Flavors at Disney’s Contemporary Resort is currently closed for refurbishment. While Disney has been fairly quiet about the refurbishment, they have posted on their website, “The Wave… of American Flavors is closed, as we refurbish this space in time for the 50th-anniversary celebration of Walt Disney World Resort. For a limited time during this closure, you’ll be able to enjoy the breakfast menu served at California Grill.” Do you suppose Steakhouse 71 will go in its place?

Disney’s Contemporary Resort has been one of the most iconic Disney Resorts on the property for years. With the Monorail line moving through the Resort lobby and stunning views of Bay Lake throughout the Contemporary and the newer Disney Vacation Club Bay Lake Tower Resort, it’s a hard location to pass up. We’re not surprised to see the refurbishment The Wave as it was never an extremely popular dining location, but was a nice option for last-minute dining reservations and an easy walk over to Magic Kingdom Park. We will say however we hope Chef Mickey remains as it is one of those staples that make the Resort so incredible!

With the Contemporary Resort rooms being refurbished to an Incredibles theme, some Guests suggested character dining with the Incredibles is coming to The Wave. Another rumor was stating a steakhouse was in the works. Does it seem like the steakhouse rumor may be true?

Disney has yet to say however that Steakhouse 71 is replacing The Wave. While this very well may be the case, we’ll hold tight until we hear it from the Mouse. Meanwhile, we can’t help but be curious to hear what “new dining experience is coming to California Grill”. With stunning views of Magic Kingdom Park, this Disney Resort restaurant is already an impressive place to dine. We’ll keep you posted as we learn more!