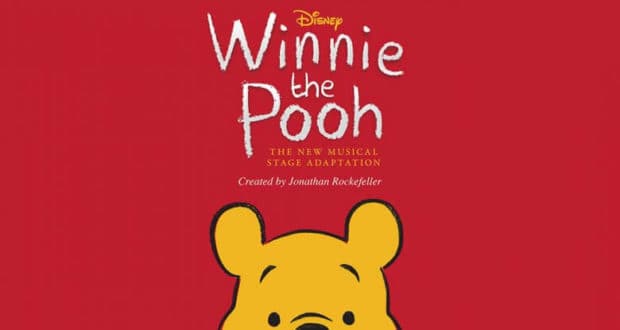 New ‘Winnie the Pooh’ Musical to Debut This Fall

We were thrilled with the announcement that Broadway would be reopening this fall and we excited to see Disney shows such as Aladdin and The Lion King as two shows that would be returning to the stage. Our inner child was thrilled however to see the latest announcement that a new musical based on A. A. Milne’s classic Winnie the Pooh stories will be joining the growing list of Disney stage musicals.

Opening on October 21, 2021 at Time Square’s Theatre Row, Winnie the Pooh: The New Musical Adaptation is being developed by Jonathan Rockefeller, who has experience working on several children’s theatre productions with a specific concentration in puppetry.

In discussing the new production, Rockefeller said, “Disney’s Winnie the Pooh material is so incredibly rich, that after more than half a century, I doubt there is anyone who hasn’t been profoundly moved or feels a personal connection with the wonderful characters of Pooh. The question we posed ourselves when creating this intimate musical adaptation was, ‘How do we bring Pooh from the screen and onto the stage in an entirely fresh and new way, yet one that still pays homage to the deep canon of Winnie the Pooh iconography?’ The answer was easy… well, conceptually easy, in theory… we needed to create incredible, brilliant, and amazing puppetry that makes it impossible to believe the characters aren’t real. Audiences can expect their hearts will be captivated by the characters, and their imaginations will soar with these life-size puppets.”

Not a lot of information has been released regarding the adaptation to stage. We do know that the classic Sherman Brothers songs will be included as well as new songs by A. A. Milne.

We can’t wait to see this silly ol’ bear join the stage once again!