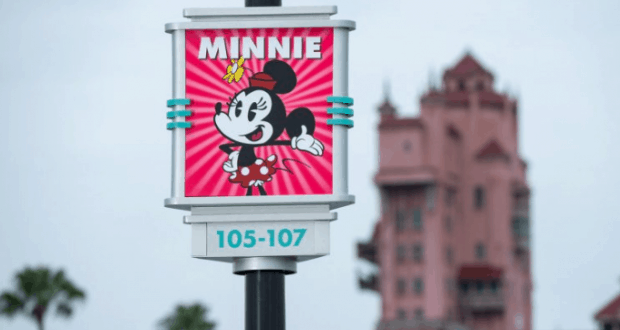 We previously announced that the new bus loops would be finally opening at Disney’s Hollywood Studios in Walt Disney World.  There have been many changes to the entrance, parking lot, bus loops, etc. as part of the major overhaul and development to the entire park.  Later this year Star Wars: Galaxy’s Edge will be officially opening, which means the park will be extremely busy for a while.  Disney Parks Blog gave us a look at the new parking lot signs, which have been updated to better match the overall theme and direction for the park.

Each section in the lot has been renamed after a variety of the characters that guests are able to encounter while at Disney’s Hollywood Studios.  The characters include:  Mickey, Minnie, Jessie, Buzz, Olaf and BB-8.  There are also two additional bus loops close to the main entrance.

All of these enhancements will greatly improve the guest arrival experience at the park.  Construction is still underway for the updated park tram lanes, walkways, additional screening areas and the station for Disney Skyliner.  Disney Skyliner will add another transportation option to get to Disney’s Hollywood Studios in addition to the existing transportation via bus, boat or car.

It is definitely an exciting time to be at Disney’s Hollywood Studios and there is so much in store this year.  We are all counting down until Star Wars: Galaxy’s Edge and Mickey & Minnie’s Runaway Railway finally open later in the year.

What do you think of these new parking lot signs?