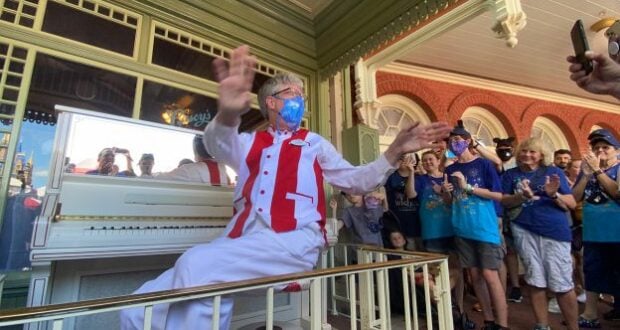 If you are a musician, playing music for a living is such a dream come true. Imagine being able to do that for 50 years. That is the reality for Randy Morris. His story is truly inspirational and will show you that if you never give up and work hard your dreams and goals are never out of reach. Shawn Slater shared his story with Disney Parks Blog:

Among the many live entertainment experiences that have recently returned to Walt Disney World Resort is the ragtime piano player at Casey’s Corner on Main Street, U.S.A. When this classic offering resumed Oct. 1 as part of the kickoff to The World’s Most Magical Celebration, musician Randy Morris was at the keys playing “Maple Leaf Rag,” just as he did 50 years ago on opening day at Magic Kingdom Park as a special appearance for the anniversary!

Randy, a then 19-year-old California native, had spent the summer of 1970 working at Disneyland Park, before deciding to move east and accept a contract to perform at Walt Disney World Resort. Fifty years later, he’s still bringing smiles to guests’ faces, playing everything from traditional favorites like “Take Me Out to the Ball Game” to new tunes like the 50th Anniversary Celebration anthem, “The Magic Is Calling.”

Throughout Walt Disney World Resort during our 18-month-long 50th Anniversary Celebration, you can enjoy a wide range of live entertainment, including classics like the Casey’s Corner piano player and Dapper Dans barbershop quartet, as well as the newest extravaganzas, “Disney Enchantment” and “Harmonious.” These are just a few of the many reasons they call this The Most Magical Place on Earth!

Make sure to see him next time you’re at Walt Disney World and get those phones out to record. Keep up with all the latest Disney information on Disney Tips and like our Facebook page.