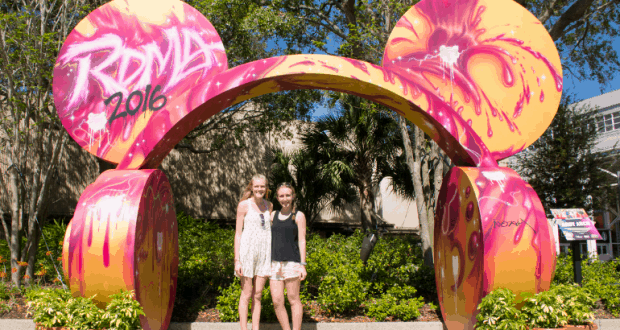 The Radio Disney arch, known as the “ARDY Arch” is currently on display at Disney Springs.  The iconic arch will be there through April 30th for guests to come and take pictures with it.  The arch has had numerous celebrities pose for pictures with it, so it is a lot of fun that guests visiting Disney Springs will also have this opportunity.  The “ARDY Arch” is a popular staple at the Radio Disney Music Awards (RDMA), appearing on the red carpet every year since 2014.  The arch represents the “ARDY” award, which is the award presented to artists for winning the fan votes.  If guests go to pose with the ARDY Arch, Disney Parks Blog has asked for guests to tag the photos with  #RDMA and #DisneySprings on social media!

If you aren’t able to visit Disney Springs to see the arch, there is still an opportunity to participate.  You can vote on your favorite artist through April 9th on the RDMA site.  (www.Disney.com/RDMA) The RDMA show will take place live on April 29th in Los Angeles, CA where the winners from the vote will be announced on social media.  Then the 2017 Radio Disney Music Awards will air on Disney Channel at 7PM on April 30th.

Who will be taking a picture with the “ARDY Arch”?  We’d love to see your pictures, too!