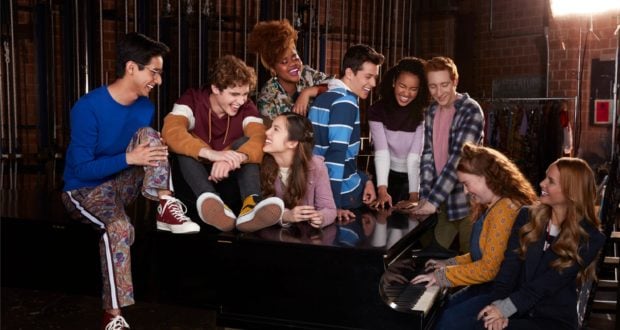 Disney+ released the second season of one of its inaugural series on May 14th.  Viewers are invited back to roam the halls of East High as Miss Jenn and the rest of the East High Drama Club comes back from winter break and begins to prepare for the spring semester, and more importantly, the spring musical!  After the first two episodes, it is clear that viewers are in for a different experience than we were in season one.  Read ahead if you’re interested in seeing what is in store for your favorite thespians!

In the first episode, viewers discover that the spring musical is not going to be followed up with the predictable High School Musical 2, much to the chagrin to some of the students.  Miss Jenn decides the drama club will be performing another classic Disney stage adaptation, “Beauty and the Beast.”  With the initial excitement and confusion subsides, the viewer also discovers that the cast list may not look the same as it did in the fall — Nini is leaving school and going to an acting school in Colorado to the shock of her new old boyfriend, Ricky.  We are also introduced to a nemesis for the drama club, but more specifically, Miss Jenn.  Derek Hough (of Dancing with the Stars fame) has joined the cast as Zack Roy, as rival theatre teacher at North High, as well as also being her ex-boyfriend.

The second episode takes us to tryouts and finds the entire drama club dealing with their own feelings of success as it applies to the musical.  Many of the students believe they are going to be typecast based on their roles in the fall: Ashlyn sees herself being cast as Mrs. Potts, while other students are thinking of taking a step back from their roles in the fall to focus on other pursuits and some are considering from emerging from off-stage roles to find a role in the cast.  By the end of the episode, viewers will get to see who has been cast in which roles — and there are definitely some surprises in the mix!

Nini is struggling with adjusting to her new school and the rules there, as well as missing her friends at East High.  Viewers are definitely going to be left with a certain feeling that maybe Nini will come back to East High before the semester is over in Colorado.  The other big question mark hanging over the remainder of the season is what intrigue and skullduggery is North High up to?  In the closing moments of the second episode, we see that new student, Lily, making a phone call to the North High Drama Department.  Is North High going to steal the plans for the show or is it something even more nefarious?

Much like the first season, each episode features a variety of both original music, as well as the songs from the musical.  We are also happy to see that the length of each episode has increased over last season, so we can enjoy more of the story with the characters, as well as the songs that accompany the show.  Needless to say, the first two episodes have us intrigued to see what is going to happen this season and it also has us tapping our feet along to the music!  Have you checked out this season yet?  What has been your most enjoyable part of the new season and are you going to check out the remainder of the season?