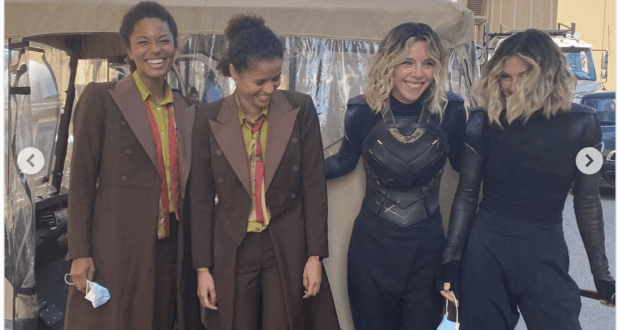 MCU is an action-packed franchise and stunt performers are part of what make these shows and films fantastic.  Recently we have seen a lot of praise for the stuntwomen who worked on Black Widow.  Now though star Sophia Di Martino, who played Sylvie, took to social media to give some love to stunt double Sarah Irwin, as well as Gugu Mbatha-Raw’s (Ravonna Renslayer) stunt double, Nadia Lorencz. 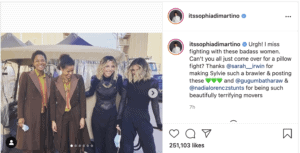 “Urgh! I miss fighting with these badass women. Can’t you all just come over for a pillow fight? Thanks @sarah__irwin for making Sylvie such a brawler & posting these ??? and @gugumbatharaw & @nadialorenczstunts for being such beautifully terrifying movers,” Di Martino wrote on Instagram.

Sarah Irwin actually was the first to post pictures on Instagram of the group saying, “Now that I am not terrified of accidentally posting a spoiler. This show was the most incredible project to work on. @itssophiadimartino thank you for trusting me to help with Sylvie’s action & being an incredible friend? @moganderton: The Time Keeper of Loki Stunts & 2 unit Directing also The Photographer. Thank you for having me on & the constant learning & pushing to grow? @loydbateman The Time Keeper of The Fights. Thank you for badass fights & so much knowledge. You are the ? @herronthatkate thank you for being an absolutely amazing director & the photo? ? @stuntsurfer thank you originally bringing me on?? @nadialorenczstunts & @gugumbatharaw thank you for being great fight partners ?? So much Loki family, thank you for being such an awesome team.”

You can see all of Loki now on Disney+.